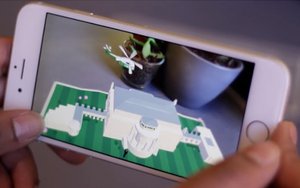 Pokémon Go introduced augmented reality to the masses some time ago and now, for anyone who missed that altogether, there’s an easy way to see AR in action, courtesy of the federal government.

The White House just introduced ‘1600’, an augmented reality app that provides an interactive, three-dimensional tour of the White House.

Anyone with a smartphone and a dollar bill can check it out.

Just download and load the app, point the camera at the face of George Washington on a dollar bill and a narrated tour begins, with various images appearing over the bill.

Pokémon Go this is not. But for anyone who has never seen augmented reality, it’s a quick and easy way to demonstrate it.

“It’s an educational tool for children,” Jay Wright, president and general manager of Vuforia told me. Vuforia, part of IoT powerhouse PTC, is the technology that powers many AR applications.

“One of the hard problems in augmented reality is to make devices see an environment,” Wright said.

It’s Vuforia’s technology that applies that seeing capability in more than 30,000 AR applications, which range from toys to heavy-duty industrial applications.

The White House application shows animations of a helicopter flying to the roof, cars arriving, fireworks, the Easter Egg roll and season changes. A tap on the roof of the oval office makes it pop up.

The animation can be viewed in 360 degrees, but if the phone camera drifts too far from Washington’s face, everything fades away.

Any Pokémon Go aficionados or those familiar with AR experiences are not likely to be overly impressed with the experience here.

But for a parent or teacher who wants to show children some of the workings of the White House using some pretty slick technology, 1600 can do the trick.

And for anyone who has never seen augmented reality, which is quite a large number of people, this app could be a hit at holiday gatherings.