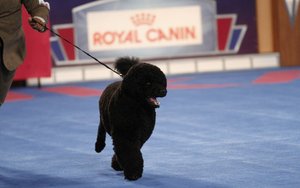 Royal Canin is launching a sweepstakes to coincide with its three-year sponsorship of the AKC National Championship.

The national sweeps launched Dec. 17 in conjunction with the first day of the show. “My Best In Show” will award prizes including a grand prize and instant-win prizes. The grand prize features a pampering package, including a $250 PetSmart gift card, one year of Royal Canin dog food and tickets to the 2017 American Kennel Club National Championship presented by Royal Canin.

The sweepstakes will run until Feb. 28, and the winner will be drawn on March 10. Consumers can enter online. The brand also has a microsite dedicated to the sponsorship.

A three-hour broadcast of the show will air on the Hallmark Channel on Jan. 23. The pre-recorded special will feature winners from each of the competition categories, highlights from the agility and dock-diving competitions, and will culminate in the crowning of Best in Show.

“As a pet food brand focused on precise nutrition, the dog show will allow us to continue raising awareness about our portfolio of diets, including 34 breed diets formulated specifically for the unique needs of individual breeds like Golden Retrievers, German Shepherds, Bulldogs and Shih Tzus,” Osborn tells Marketing Daily. “A dog show is a great platform to reach the owners and breeders of pure-breed dogs.”

The dog show allows the company to celebrate the human and canine bond, Osborn adds. There are more than 5,000 dogs competing this year, a record number of entries.

“We also are able to bring together like-minded brands that share a similar passion for animals including PetSmart, Spectrum Brands (Furminator and Nature’s Miracle) and Banfield Pet Hospital,” Osborn says.

The AKC National Championship is the largest dog event in North America, according to the company.

As part of the sponsorship, Royal Canin completely revamped the look and feel of the show. The show will feature a new logo, highlighting the new name and new partnership.

“The brand’s signature red color with gold accents will be displayed throughout the event and we’ll have more than 800 pieces of unique signage,” Osborn says.