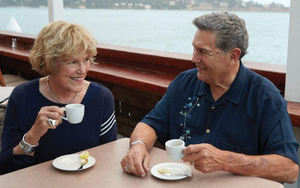 JP Morgan Chase & Company and Money are partnering for a campaign featuring author and media personality Lynne Martin, her husband Tim, and their unusual retirement.

Themed “Mastering your retirement,” the campaign talks about the 70-something couple and how they sold their home, disbursed their belongings and set out on a journey that took them across several continents.

Their adventure was chronicled in Lynne Martin’s best-selling memoir Home Sweet Anywhere, now in its second printing. Their personal mantra for life, “Postpone Nothing,” has become a phenomenon that has resonated with thousands of fans worldwide.

The campaign focuses on investing, financial planning, listening to personal financial advisors and, most importantly, reimagining retirement. In the Martins' story, Chase Bank found the inspiration they needed to convey that important message to their audience, according to the company.

The campaign features the Martins in two full-page advertorials in the December and January issues of Money, as well as two videos produced by Time, Inc., which are featured on a dedicated Web site created by Chase.

These pioneers of the “home free” movement and self-described cheerleaders for seniors prove that people can find excitement and new challenges in retirement. Although they were able to live nicely on their investment income and Social Security, soon their income from a second career as authors and spokespersons made more travel possible.

Working with their financial advisor was key in allowing them to explore options for saving, setting new goals, and reaching them. Lynne and Tim Martin offer viewers the opportunity to better understand Chase Private Client’s services, according to the company.