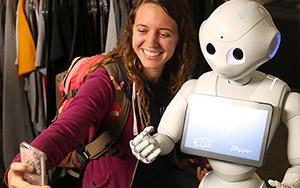 SoftBank Robotics and its agency Midnight Oil recently produced a series of events designed to demonstrate its humanoid robot Pepper's capabilities and value in a traditional retail store setting.

The 4-foot tall robot can recognize key human emotions and adapt its behavior to the mood of the person it's dealing with.

These events, which showcased Pepper interacting with retail customers, took place at the “B8ta" tech stores in Palo Alto and Santa Monica, CA, as well as "The Ave” clothing store at the University of Southern California (USC) campus in Los Angeles.

Customers were greeted by Pepper,  then were introduced to The Ave through dedicated applications built for this particular experience.

Shoppers learned about its patented printing process, shopped the store’s top collections, created and purchased custom gear, and discovered the history of The Ave.

The Ave also hosted an open house, where SoftBank product manager Nicholas Beucher spoke with students about the uniqueness of Pepper as a platform and what it means for the future of business.

The project was promoted via social media plus an editorial in the USC paper.

Pepper’s three-day activation at The Ave is credited with tripling revenue, bumping up foot traffic by 20% and increasing customer interactions by 98%. Pepper also grew total mentions across social media by 129% through a social media contest in which shoppers who took a selfie and shared it on Instagram or Twitter with #PepperGoesToSchool and #MeetPepper.

Now, Midnight Oil and SoftBank are turning these results into case studies and an awareness campaign aimed at software developers and retailers.

Pepper is relatively common in Japan, where the robot has served as salesperson, waiter and customer service rep in several hundred companies.