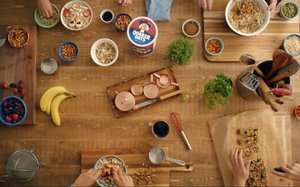 Quaker is launching an ad campaign that celebrates its 140th anniversary, playing up its history and heritage in making oats.

The campaign, themed “We are the good we make,” includes two TV spots created by PepsiCo’s in-house creative team, The Creators League.

“Heritage” shows the connection between Quaker’s history and its future, reminding people that at its core, the company consists of millers who are dedicated to making quality oats. “Creations” is more food-forward and showcases the power of the oat, and how a little bit of creativity and a personal touch can transform its blank canvas into a meal.

The spots broke January 2 and will air across broadcast and cable networks including ABC, NBC, E!, TBS, HGTV, Food Network and Bravo.

The campaign is similar to the brand’s previous campaign, which ran for more than a year, in that they both focus on how there is a window of opportunity in the mornings to help positively influence the rest of the day, and Quaker wants to play a role in helping families make the most of that time.

“Off You Go” used creative storytelling to emotionally illustrate this idea, while “We are the good we make” taps into Quaker’s history as leaders in breakfast and how oats are a blank canvas that can deliver a creative, delicious and nourishing start to the day, says Paige Corbett, Quaker marketing director.

“In a time when many people are finding comfort in getting back to basics, the ‘We are the good we make’ campaign is meant to remind people that Quaker has been there from the beginning,” since 1877, says Corbett tells Marketing Daily.

“From the approachable casting to the uplifting, yet gritty music to the thoughtful way we feature the oats, the spots are meant to truly reflect the tagline in a meaningful way that pays homage to Quaker’s rich heritage and bright future,” says Patrick.