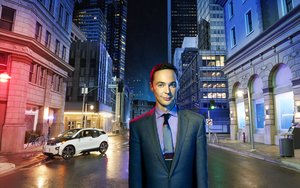 Intel is launching the brand’s first B2B commercials focused on the cloud and supercomputing.

Intel has been collaborating with the actor for three years. He was last featured in a TV spot that broke in October and also included swimmer Michael Phelps.

The aim of the campaign is to showcase Intel’s vision of a world that is smart and connected to the cloud and to better connect how Intel technology enables business customers to achieve their success, according to a company spokesperson.

The ads showcase how Intel is powering the billions of smart, connected computing devices around the world. The creative focuses on the “amazing experiences” that Intel powers from supercomputers that can help find the cure for diseases to providing cloud services for a ride share app.

Breaking Jan. 1, the first spot shows Parsons roaming the busy streets of New York, informing bystanders that 98% of the cloud runs on Intel, which powers sensors, traffic lights, ride-share apps, and even autonomous cars. The second spot shows Parsons in a scientific lab explaining that more than 90% of supercomputers responsible for computing massive amounts of data run on Intel.