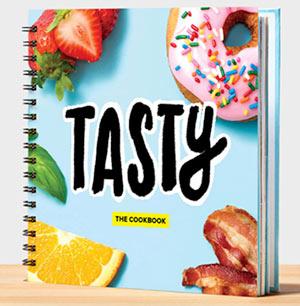 BuzzFeed has managed to turn viral videos into publishing gold. The company’s popular cooking vertical Tasty has sold more than 100,000 copies of the "Tasty: The Cookbook" since its launch in November, making it one of the bestselling cookbooks of the year, per Bloomberg.

"Tasty: The Cookbook" is not available on Amazon or in brick-and-mortar bookstores. Instead, it is only available on its own Web site.

An interesting feature of the "Tasty" cookbook — it is customizable, combining its online social roots with a more traditional format. Users can go to the site and choose from 21 categories to appear in the book. This on-demand, made-to-order printing process means "Tasty" doesn’t waste resources on printing thousands of uniform copies at a go.

The categories are built around fun, Millennial-sounding personalities, such as “Entertainer” and “Carb Lover,” with recipes grouped under themes like “Hangover” or “5 Items Or Less.”

Users can also customize a dedication page, complete with emojis.

Because it is only sold through BuzzFeed’s site rather than a conventional retailer, the cookbook won’t appear on any New York Times bestseller lists. But if it could, "Tasty" would be No. 9 on Nielsen BookScan’s bestselling cookbooks for 2015 — that’s after being on sale for just two months.

Bloomberg estimates BuzzFeed’s cookbook sales would range between $2.4 million and $3.9 million. The book sells for $24 in paperback and $35 for hardcover. (The site used to have a gift set option that included an apron for $39, but the aprons sold out.)

That may not seem like huge sales for a company valued at about $1.7 billion, but a new revenue stream is valuable at a time when publishers are experimenting with ways to become less reliant on declining ad revenue.

It helps that BuzzFeed’s Tasty reaches 500 million people a month with its snappy cooking videos shared at lightning speed across social media, providing a huge ad platform for the book.

The "Tasty" cookbook is promoted on the Tasty Facebook page with a cover photo, along with a “Shop Now” link.

The cookbook was created by Buzzfeed’s Product Lab, which was formed just a few weeks before the book launched. The team’s main focus is on ecommerce.

“This has given us a really strong signal: This is just the beginning of building products off of Tasty,” Ashley McCollum, the vertical's general manager, told Fast Company. “There’s a demand for it. And people identify with this brand more than we could have known."
books, ecommerce, food, online publishing, web sites
Next story loading