Fiverr Launches 'In Doers We Trust' 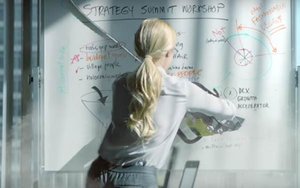 Online freelance marketplace Fiverr and its agency DCX are launching a new multimillion dollar brand campaign that focuses on entrepreneurial spirit and a mantra of taking action.

The “In Doers We Trust” campaign features out-of-home ads in San Francisco and New York that debut this week and in late February, respectively.

Experiential elements, additional out-of-home executions and more digital components of the campaign will be introduced in the coming months.

The geo-targeted approach on Facebook and YouTube is focused on Fiverr’s key audiences in major entrepreneurial hubs across the United States, with targeted content aimed at not only spreading awareness, but converting prospective buyers.

“'In Doers We Trust' communicates in a powerful, no-holds-barred way the values and approach our community members and so many others bring to the activity of entrepreneurship,” says Peggy de Lange, vice president of corporate marketing, Fiverr.

“It's an expression of our worldview, and we see it as a rallying cry for millions in our community while building awareness among the countless others that share the same outlook," she adds.