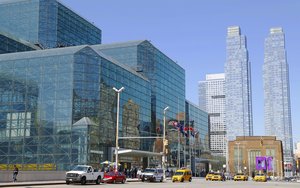 Every year kicks off with the mega CES show in Las Vegas, where all the latest consumer electronics gadgetry for the next year is introduced.

And every year, that event is followed a short time later by the National Retail Federation Big Show at the Javits Center in New York.

In addition to the difference in size, with CES dominating with 165,000 attendees compared to 33,000 at the NRF event, the shows traditionally have a different focus, one on consumer electronics and the other on solutions for retailers.

Based on the advance looks I have so far, the NRF show that starts Sunday has more in common with CES than ever, thanks to the Internet of Things.

For example, at CES, Pepper the robot from Softbank was shown privately in a hotel suite while at the Big Show, I’ll meet up with Pepper again, this time on the show floor showing what it can do at retail.

The advance notification from Honeywell states that it will display ‘Internet of Things solutions to enhance retail store operations.’

The Big Show still be overflowing with companies dealing with traditional retail issues, such as point-of sale technologies, digital signage and all sorts of customer tracking technologies.

Verifone, which always introduces something new at the Big Show, will be showing what it’s been up to in the areas of smart payments and commerce in the connected world.

Philips Lighting, which we’ve regularly written about here in the IoT Daily, will be showing its LED-based indoor positioning system. This is the system that can pinpoint in-store shoppers through light hitting their smartphones.

NCR will be showing its Smart Kitchen technology, creating a kitchen controlled by voice and motion that links consumers to their favorite retailers.

Samsung, which had an overwhelmingly large presence at CES, will be introducing some new shopper and shopping capabilities, which will be announced next week.

The Internet of Things dominated CES. Now it’s about to move into the NRF Big Show.