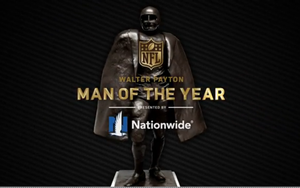 Nationwide and the NFL announced a new four-year agreement Monday that will keep Nationwide as both a league sponsor and an official insurance sponsor.

As part of the new partnership, Nationwide will remain the presenting sponsor of the Walter Payton NFL Man of the Year Award.

Since 2014, Nationwide has been an official sponsor of the NFL and Walter Payton Man of the Year Award -- the award that recognizes a player’s volunteer and charity work as well as his excellence on the field.

The new agreement provides for additional Walter Payton NFL Man of the Year Award integrations into the first and third rounds of the NFL Draft, giving Nationwide a year-round opportunity to share the stories of the work being done by the nominees and winner year-round.

Over the past three years, Nationwide has given nearly $800,000 to nominee foundations, said Terrance Williams, Nationwide’s chief marketing officer.

“Nationwide cares deeply about the communities where our members and associates live and work,” Williams said in a release. “This award aligns closely with our mission to improve those communities and be more than a business.”

Nationwide also remains a top-tier sponsor of NFL Honors, a star-studded football and entertainment event where the NFL salutes its best players and plays from the season.

As an official sponsor, Nationwide will be able to feature the NFL “shield” and the collective marks of all 32 NFL teams in national marketing and advertising campaigns.

“The NFL remains one of the best avenues to share Nationwide’s message of being able to protect the many sides of our members,” said Williams. “Partnering with the NFL allows us to continue to share that message with a diverse and extensive audience.”