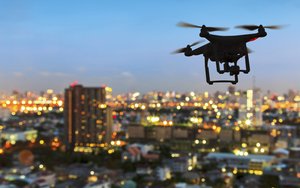 As pursuits are underway to bring the Internet of Things to the skies, a collaboration between two groups aims to bring security guidance to smart city drone programs.

A new report by the Cloud Security Alliance and the Securing Smart Cities initiative lays out the overall landscape of drones being implemented in cities in the future and outlines guidelines for approaching the associated security risks.

“Whether you are a fan of them or not, it is becoming increasingly evident that drones will in fact
play an important and even critical role in the smart city environment,” said Brian Russell, chair of CSA’s IoT Working Group and co-author of the report.

“Cities around the country are actively working to implement large-scale drone programs to support various functions ranging from medical, transportation and agricultural to emergency management and infrastructure protection. It is important that these drone systems be safe, stable, resilient and sustainable,” Russell said.

In addition to mentioning potential use cases for drones, the report focuses on the challenges that cities should be aware of when rolling out drone programs.

Some of the challenges appear to share similarities to other areas of focus within the broader Internet of Things. For example, the report says drone manufacturers may not always incorporate high levels of security into their products, which has been a focus by other groups and government agencies, including the FCC, as the IoT Daily recently reported (Now FCC Stepping In On IoT Regulations).

Here are the challenges for implementing drone systems:

“From a security perspective, this guarantees potential disasters, should one of several drone systems or the software used to control them become compromised or manipulated,” said Mohamad Amin Hasbini, co-author of the report.

“We’re trying to raise these issues early to the public, which is why we’ve prepared these guidelines,” Hasbini said.