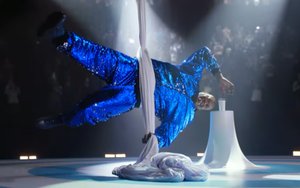 Oreo is launching the “Oreo Dunk Challenge,” its latest global campaign under the “WonderFilled” creative platform.

Dunking — a theme that has been a recurrent in Oreo’s ads nearly since the cookie’s inception in the early 1900s — is in this case being used as an engagement and social media conversation driving device.

A core objective is to inspire fans around the world to enter a Dunk Challenge sweepstakes by snapping or taking videos of themselves dunking an Oreo in milk, then posting it on Instagram, tweeting it or commenting on the brand’s Facebook page, using #OreoDunkSweepstakes.

The five grand prizes are trips for the winners and their guests to attend events in Los Angeles or New York, during which they will get to dunk Oreos with one of the campaign celebrities. (In an unusual show of sweeps creative flair, the drawing for the winners on May 1 will involve dropping Oreos from drones into cups, according to the official rules.)

The advertising elements drive consumers to the online entry area by calling out the hashtag/URL at the end.

“People across this country grew up dunking Oreo cookies in milk. Our goal is to not only recapture the simple magic of those moments but to do so in a way that feels novel and fresh,” says Patty Gonzalez, director, Oreo equity, North America.

Dunking On the Flying Trapeze

In the three 15-second TV ads, they appear — courtesy of stunt doubles — to perform trapeze feats in a circus arena as a lead-up to executing Oreo dunks. O’Neal is unfurled from the top of the tent via a rope made of sheets (above), Aguilera balances a bike on a tightwire (see ad below), and Neymar Jr. plummets from on high to bounce off a huge target.

The TV ads debut on February 8 and will continue to air on high-profile programming, including the Grammy Awards on Feb. 12 — Oreo will promote via Snapchat leading up to the awards show — and during the NCAA Final Four.

The videos of the celebs, which will roll out during February and March, show them performing non-life-threatening but equally quirky types of dunks — Shaq rapping freestyle before dunking, for example.

O’Neal will be the draw at a February 8 kick-off event in New York City’s Chelsea Market, where he will demonstrate using “mind-reading technology” to demonstrate how Oreos can be dunked hands-free, according to the brand.

The three will also be featured on in-store promotional materials and on Oreo packaging during the run of the campaign.

In addition, Oreo and Google have partnered on a global promotion, launching Feb. 20, that will employ custom technology to let fans use their smartphones to scan an actual Oreo cookie and unlock a digital experience.

Oreo will do takeovers on “Live With Kelly,” “The Chew” and “Jimmy Kimmel Live,” in addition to promotion through multiple digital partnerships.

Other live executions will include sampling and dunking at the NCAA Final Four and in 8,000 U.S. stores, and a milk marketing/dunking initiative that will deploy 12 million Dunk Challenge-branded milk containers in grocery stores across the country.

The campaign will roll out to international markets over 2017’s first half, with some creative adapted to local markets.

The Martin Agency is the lead creative agency for the Oreo Dunk Challenge. Carat is the media agency, 360i is handling social media, and Weber Shandwick PR.

Oreo’s last global, integrated marketing campaign — “Open Up with Oreo,” in 2016 — encouraged consumers to open their hearts to people who are different than they are, to discover the similarities.