One's A 'Bot And One's Not: Two Shows Ask What It Means To Be Human 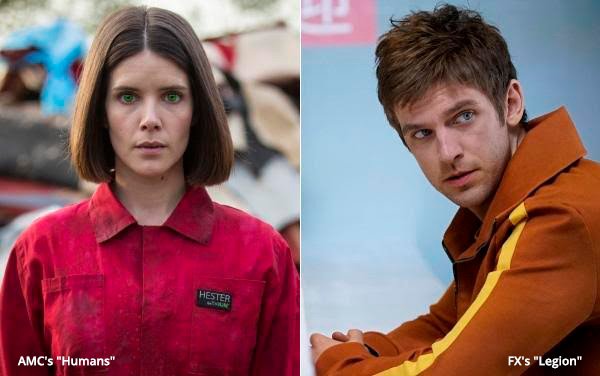 In one show, advanced humanoid robots have evolved to become just about human (but not quite).

In the other show, a genetic mutation of some sort has one human (and possibly more) evolving into a new stage of humanity characterized by advanced telepathic abilities (to say the least).

Welcome to TV 2017, in which futuristic TV shows depict a future world that in many ways is already here or, at the very least, possible.

The show with the advanced humanoid robots is AMC's “Humans,” which returns for its second season Monday night (February 13) at 10 Eastern. The other show is “Legion,” which premiered this past Wednesday night at 10 on FX.

You can be forgiven if you forgot about “Humans.” The first season aired in 2015 and hasn't been seen since. The show returns for a run of eight episodes -- a blink of an eye for a TV show, but the kind of short “season” that has become commonplace on TV today.

“Humans” tells the story of a new breed of robotic servants whose use has become ubiquitous throughout society. In the first season, the line between human and robot began to blur when a small but growing group of robots -- called “synths” in the TV show -- adopted reactions and even emotions that were more human than machinelike.

This “evolution” is being spurred by a mutation of software and it has this group of synths (including the one pictured at left, above) aspiring to be something more than just dumb, emotionless servants.

For us real humans toiling at our jobs and going about our lives here in the real world of 2017, the new season of “Humans” has something to say about our increasingly automated society.

We already live in a world where robotic machinery and computer software have made many tasks doable without human participation. As a result, jobs have disappeared.

In our world, robot technology has taken the place of humans in many workaday areas such as assembly-line manufacturing. But robots have not yet replaced humans in the areas in which human interactions are supposedly still prized, such as in sales, customer service, human resources, and the management of others.

In the season premiere of “Humans,” however, a long-time mid-level executive, who held a job managing accounts with various human customers, is suddenly replaced by a synth. The human executive is told by another human (presumably from “human” resources) that “the decision has been made to make [his job] a non-human role going forward.”

The laid-off executive then tells this other human: You're next. It's a chilling scene that rings true. Like other great sci-fi movies and TV shows, “Humans” makes you feel like the scenarios it is depicting could happen here and now. And perhaps they are.

In FX's “Legion,” the central character is a man who has been diagnosed as severely mentally ill. But his real problem might be that he has mutated in some way -- probably in some genetic core -- so that he exhibits powers beyond those of other humans.

This malady manifests itself in terrible dreams and hallucinations -- mainly because neither the patient nor his overseers can understand it, much less manage it.

Among other things, he sometimes goes into Bruce Banner mode -- not turning into the Incredible Hulk, mind you, but having fits in which his brain seems to cause multiple objects to fly around the room.

Because of this and other powers he seems to possess, several shadowy organizations are after him in order to secure his services and exploit his abilities. “Legion” is based on a series of Marvel comic books, but here in the early going of this series, you might characterize this “hero” -- played by Dan Stevens of “Downton Abbey” (above, right) -- as not “heroic” at all.

Instead, he's just mystified, doesn’t know reality from fantasy, and has only the tiniest kernel of an idea that he might be equipped with “special” talents beyond those of mortal man. They're beyond his control too.

When watching this show, a viewer can't quite make out the difference between what is real or hallucinated either. Maybe the reality in this show is virtual, which is not quite real. Sound familiar?