Samsung Unveils Smart Glasses That Act As A Monitor 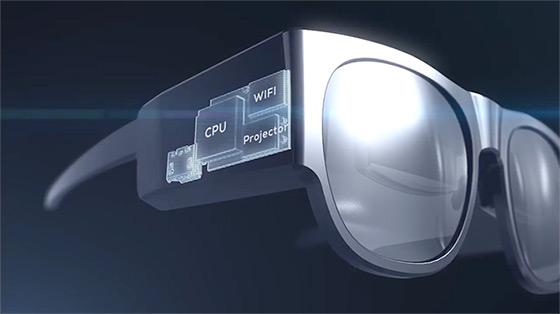 The concepts were designed at Samsung’s C-Lab as future products that could be realized within the next four years.

One of the concepts, called Monitorless, comprises glasses that can pair wirelessly to a smartphone and computer to display the screen content from the devices on the glasses as a HUD (Heads-Up Display). The glasses can function as an augmented reality device, allowing the user to see the real-world along with the content being displayed, or as a virtual reality device, blocking out the real-world view.

The glasses use electrochromic glass for the lenses, enabling this functionality, according to Samsung. Electrochromic glass, also referred to as ‘smart glass,’ can change its opacity from transparent to blocking light transmission. Samsung refers to blocking light transmission through the lenses as virtual reality, but the glasses appear to not function as an immersive VR headset.

Whether the glasses would have location and orientation awareness or other head-tracking capabilities is unclear.

One example use case of this would be playing a computing-intensive game. In that case, the computer would do the processing for the game, the smartphone would act as a touch-based controller and the game would be displayed on the glasses.

Another concept introduced, VuildUS, is a system for visualizing furniture in a user’s home to determine if an item would fit before purchasing it online.

It appears to resemble Wayfair’s WayfairView augmented reality experience, which can digitally place a piece of furniture to-scale in a physical space using a Tango-enabled smartphone.

However, Samsung’s system is based on VR rather than AR. The furniture is not placed in relation to what the user can see in the real world, but rather it is done in a virtual representation of the user’s home in a mobile-based VR headset. The virtual model of the user’s home is created by a 360-degree depth-sensing camera, which is the other part of Samsung’s system. Currently, AR versions of this experience, such as WayfairView, are limited to the two Tango-enabled devices currently on the market.

The other two concepts were traVRer, a platform for 360-degree content designed to act as a virtual traveling experience, and Relumino, a mobile-based VR application designed to work as an aid for people with visual impairments.