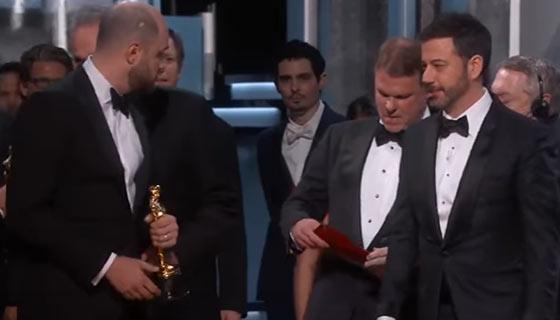 Viewers turned to social media to discuss the Best Picture envelope mix-up according to Amobee brand intelligence. There were 133,400 Tweets around Warren Beatty who was handed the wrong envelope and subsequently tried to explain how the mix-up occurred, compared to 101,800 Tweets sent during a similar mix-up when host Steve Harvey announced the wrong winner at the 2015 Miss Universe competition, a fact host Jimmy Kimmel was quick to joke about.

There were 111,200 Tweets mentioning the word Envelope and 95,300 Tweets around the word Mistake as people tried to process and analyze what happened after the "La La Land" / "Moonlight" Best Picture flub.

The most mentioned Oscars advertiser on social media during the program was The New York Times which received more than 78,200 Tweets, Amobee reports. Since the newspaper’s “Truth” ad was first uploaded to YouTube on February 23, it has been viewed over five million times.

“The clever integration of Red Vines and Junior Mints candy brands during the Oscars was a creative way of raising awareness during the broadcast without having to buy traditional TV advertising that resulted in a lift in digital brand engagement,” says Jonathan Cohen, principal brand analyst, Amobee.

Despite host Jimmy Kimmel’s attempts to bait President Trump with messages-- #MerylSaysHi and “Hey @realDonaldTrump u up?"-- which received 177,000 and 226,000 retweets, respectively, the President remained offline during the Sunday night ceremony.

Amobee identifies digital content engagement as a measure of what people are seeing, reading, interacting and engaging with on over 600,000 sites on mobile, video, web and social.