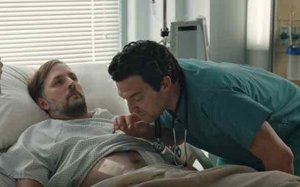 Both ads are new variations on the brand’s ongoing “You’re Not You When You’re Hungry” marketing theme.

In “Recovery Room,” scheduled to begin airing on TV next week, a patient looks appropriately stunned as he is told the surgeon’s phone was accidentally left in his abdomen — and the surgeon answers a call by talking into said abdomen before assuring the patient that the problem will be fixed. Ending message: “You’re careless when you’re hungry.”

The second spot, “The News” (below) has local TV news anchors and a weather person all appearing to speak in tongues when they open their mouths — the result of a teleprompter operator who is napping on the job. Ending message: “You’re sleepy when you’re hungry.”

The “News” ad is already embedded on the brand’s Facebook and Twitter pages, but won’t start airing on television until later this year.

The ads, from BBDO New York, were directed by David Shane of O Positive.

Snickers also scored some very clever tweets during this past Sunday’s Oscars. The brand showed a GIF of Nicole Kidman’s bizarre style of clapping with the observation: “You forget how to clap when you’re hungry.” Even more on the mark, given its marketing tagline, after the epic mess-up during the “Best Picture” announcement, Snickers tweeted: “The moral of the story is: EatASNICKERS before you hand out the winning envelope.”