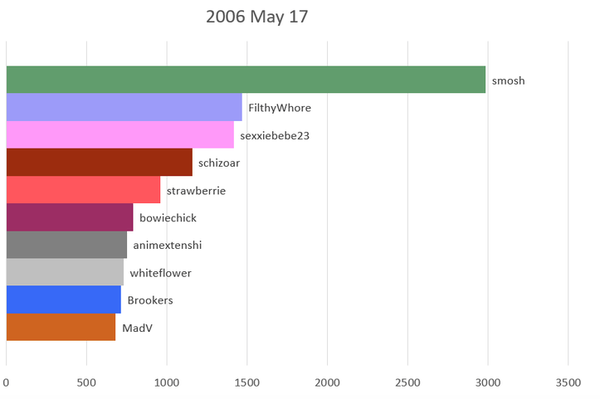 Legendary television series get that way because they stay in Nielsen’s top 10 for weeks and weeks, year after year. Series like “The Simpsons” and “American Idol,” “Dallas”  and “I Love Lucy” and “All In The Family” defined the medium, as did, in earlier days of cable “Rugrats” and “MASH” reruns and “Larry King.” They were always near the top.

Now we’re in the 12th year of YouTube with its billions of views per second or whatever, and that historical long look has been pretty much absent until now. A story on Tubefilter leads a reader to a Reddit user, named Davidjl123, who has charted the most subscribed-to channels since 2006 (when YouTube was in its second year).

It’s hard to use this data as a trip down memory lane because YouTube is so fragmented, and because it has changed so much and because, frankly, much of the adult world wasn’t paying much attention. Some day, the story of some of these YouTube stars will make a good movie.

Looking at the charts, you see the emergence of Vevo and Jenna Marbles, College Humor and Shane Dawson and Katy Perry and other pop stars, and the power of Machinima and the brief moment in time when CBS was a super hot YouTube channel.

But as Tubefilter and others point out, the charts show the amazing staying power of “Smosh,” the silly, delightful boys-will-be-juvenile-forever channel hosted by Ian Hecox and Anthony Padilla, who started doing it in YouTube’s first year. They were just 17 then; they’re 29 going on 17 today. (Despite considerable fame and literally billions of views, they’ve told me, most of the time when they’re in the adult world, nobody recognizes them.)

In chart after chart, year after year, there’s “Smosh” but nothing else has the staying power (comedian “RayWilliamJohnson” seems to come close and so does “Nigahiga.” ).

“PewDiePie” is so massively popular now but wasn’t even around in those early days.

Since 2006, there have been a few star channels to come and go. “FilthyWhore” and “Sexiebebe23” had their days back in 2006. A 78-year old guy was a brief sensation and his “Geriatric1927” was the most subscribed to channel for a brief moment in time.

Miley Cyrus and the Jonas Brothers suddenly take off in 2009. A channel named “Fred” actually beat “Smosh” to the million-subscriber mark, also in 2009.

And  “Nigahiga” first breaks the three million subscription mark in 2010. That’s the same year Felix Kjellberg registered with YouTube for PewDiePie. By 2013, his channel is “making colossal gains, a consistent 100-200k subs a week!” writes Davidjl123.

Take a look at the graphs. They tell a story that is so esoteric and oddly, so widely unknown, about the most dominant video content source in the world.