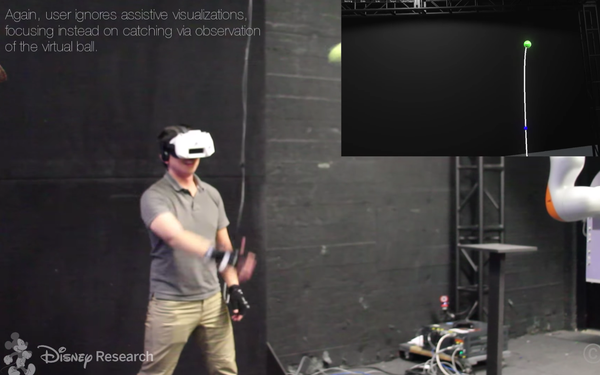 Interaction with dynamic physical objects in virtual reality may soon be a possibility, thanks to a new test by Disney Research.

The test involved one researcher using a virtual reality headset, immersed in a virtual world, and the other passing a physical ball to the catching researcher in VR.

“As virtual reality systems become increasingly common, the idea that the user experience can be enriched by enabling dynamic interaction with real objects is gaining interest," Markus Gross, vice president of research at Disney Research, said in a statement.

"This early work by our team is tantalizing and suggests that bridging the virtual and real worlds is not only possible, but offers many new opportunities and benefits," Gross stated.

A motion capture system tracked the motion of the ball, as well as the head and hands of the catcher, and displayed representations of them in the VR environment. The ball’s trajectory was calculated in real-time and the researchers tested the effects of displaying different combinations of the ball and its path on the catcher’s ability to catch the ball.

All three options yielded a 95% successful catch rate, according to Disney Research.

However, the behavior of the catcher changed based on how the ball’s state was depicted. When the catcher saw only the ball, as it would appear in the real world, the motion of catching was constant and fluid. When the catcher saw no ball, but the spot where it was projected to land, the catching behavior was rapid and precise. The researchers describe this as ‘catching in a robotic-like fashion.’

The researchers said this type of behavioral change results from providing the user with advantages that aren’t possible in the real-world, such as knowing precisely where a ball is going to land. This dynamic can also be leveraged when creating virtual reality experiences, according to Disney Research senior scientist Günter Niemeyer.

"With VR, we can show you the future by pre-rendering where the ball is going to be," Niemeyer stated. "For some types of interactions, game designers might choose to take advantage of VR to make certain tasks easier, just as using a net to catch balls might make some games more enjoyable."