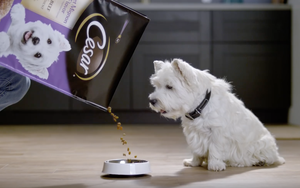 To support the new product launch, Cesar brand is rolling out a new ad campaign, “Tastes Like Happy,” from BBDO San Francisco, which brings to life the reaction of dogs to tasting the new food. The effort includes broadcast, print and social. Earlier this month, the brand launched a digital spot in conjunction with International Women’s Day that showed how dogs are not just “man’s best friend” — they are also woman’s.

Consumers have asked for the company to expand its offerings to include dry dog food, said Brian Nugent, marketing director, dry dog food at Mars Petcare. The addition gives owners another choice with recipes with real meat as the first ingredient — including beef, poultry and lamb.

Meaty pieces are combined with H-shaped kibble, specifically designed with small dogs in mind to help them easily pick up and chew, while also helping to keep teeth and gums clean.