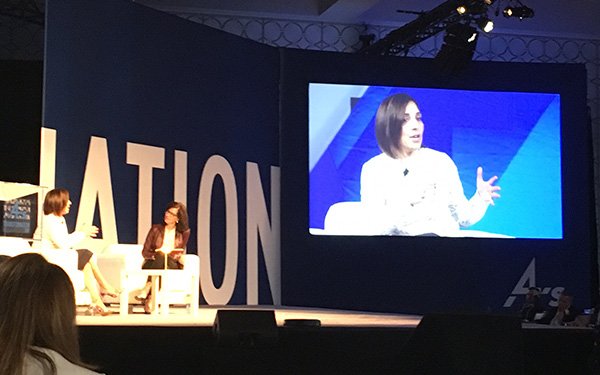 The media landscape continues to shift as audiences move quickly with new content choices and technology.

At the 4As Transformation Conference in Los Angeles on April 4, NBCUniversal's Linda Yaccarino discussed with OMD's Monica Karo how the impact of investment and partnerships shape how NBCUniversal targets shifting audiences at scale.

NBCUniversal is opening up its pocketbook to capture the consumer all day. The network now guarantees $1 billion in inventory across the whole portfolio that will enable clients to switch to other platforms based on intended goals.

If it doesn't work for "Tonight Show," it will shift the buy to the Kardashians on the E! Network. "We have the scale," she says. If a current strategy isn't paying out, NBCUniversal will easily move the buy to get what it needs on the audience segment, she says.

Reach is achieved through partnerships. NBCUniversal has spent over $1.5 billion over content-sharing deals, including owning 30% of BuzzFeed. "We know NBCUniversal, we can give you a lot — 20% to 25% eyeballs is a lot, but not enough to reflect current consumer behavior."

As a way to appeal to younger viewers, NBCUniversal assigned BuzzFeed with producing all Snapchat content for the Rio Olympic Games. The experiment exceeded expectations and sparked viral buzz.

Younger viewers are also the catalyst behind the $7-plus billion-dollar sponsorship with the Olympics through 2032. "We joke this is so long those athletes aren't even born yet" says Yaccarino. The reason for the deal was to ensure the next generation have a love of the Olympics."

Above all, NBCUniversal wants to make sure the consumer never leaves the network's portfolio.

Yaccarino outlines the perfect day with a young mom waking up to Matt and Savannah on the "Today Show." She moves to Apple News where NBC provides content while sitting in car. Throughout the day, she may check out BuzzFeed. Later in the evening, she catches the E! original series "The Rundown," then ends her day with Jimmy Fallon and the "Tonight Show."

The network is also focused internally. The company is building a team to shift mind-set. Says Yaccarino: "You treat [things] differently when you have ownership than if you are a temporary renter."