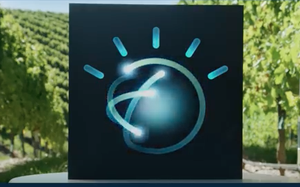 IBM is using its sponsorship of the Masters tournament to launch a new series of commercials under the theme, “Watson at work.” The spots position the A.I.-system as a super-efficient coworker that can do the job of analyzing all of the data that humans can’t.

“More and more businesses are absolutely accepting A.I. as a technology that can help them,” Ann Rubin, vice president of branded content and global creative, tells Marketing Daily. “There is so much data in the world, a human literally can’t keep up with it.”

The series of commercials (from agency Ogilvy & Mather) show off a number of different scenarios, from ordering an elevator repair before it’s needed (using sensor and maintenance data) to helping E&J Gallo Wineries manage irrigation to grow better grape crops. The spots continue to give Watson a personality, in one case having it mimic a missing Australian energy plant worker’s slang. Other spots showcase the system’s work in security analysis, medicine, aviation, insurance, and sports.

IBM initially introduced Watson with a series of commercials featuring celebrities such as Bob Dylan and Stephen King having conversations with the system. Since then, IBM has been showcasing the platform in business settings. This latest effort is the most tangible in showcasing how Watson helps specific businesses with specific problems, Rubin says.

“When we first started talking about Watson in a big way, people didn’t know what it and cognitive systems could do in business,” Rubin says. “This is much more specific to [showing Watson] achieving this outcome in this industry.”

As one of only a few sponsors for the Masters tournament (with an audience of business leaders), IBM has a huge opportunity to showcase itself during the broadcasts, Rubin says. The television campaign will be supplemented with digital executions that go into greater depth about how Watson is helping the specific businesses showcased, she says.

“[The Masters] is a great platform for us to tell a broad story, where we can run a lot of spots,” Rubin says. “People who are interested will go online to look for more information. We find our web traffic spikes dramatically when we have big TV pushes.”