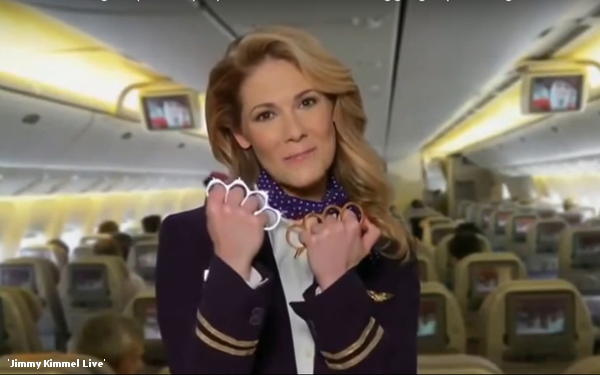 Late in the day Tuesday, United Airlines CEO Oscar Munoz finally issued what communications experts consider a true apology and a promise to ensure such an incident never recurs. But not before comedians and the public reacted negatively to Sunday night's events.

With the release of a video showing strong-arm tactics to eject a paying customer from his seat, United Airlines has become the brunt of every imaginable joke -- on Twitter and late night TV -- but it is ABC’s “Jimmy Kimmel Live” that may have epitomized it with a parody video depicting United’s new marketing tagline: “F*ck you!”

The incident has also provoked a storm of discussion not just over United’s response, but about the customer rights of all airline travelers.

“I’m never flying United again…,” Tom Goodwin, Zenith Media, executive vice president-head of innovation, quipped in a tweet this morning, adding, “unless it is a bit cheaper or has better flight times.”

It was a similar sentiment offered by Kimmel in his set up to the faux United marketing video: “The next time we book a flight, It doesn’t matter if it’s United, or Delta, or American, if one of those flights is a dollar less than the others, that’s the one we’ll pick. They know this. That’s why we’re stuck with them.”

@ianbremmer posted a mock Southwest Airlines response campaign: “We beat our competitors. Not you.” 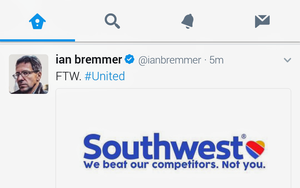 @atlantaholic posted an image of “Waking Dead” nemesis Negan walking through a United aisle, with the tweet, “United Airlines be like “eenie… meenie…,” suggesting he’d remove passengers with his baseball bat, Lucille. 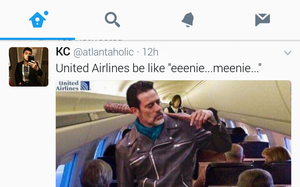