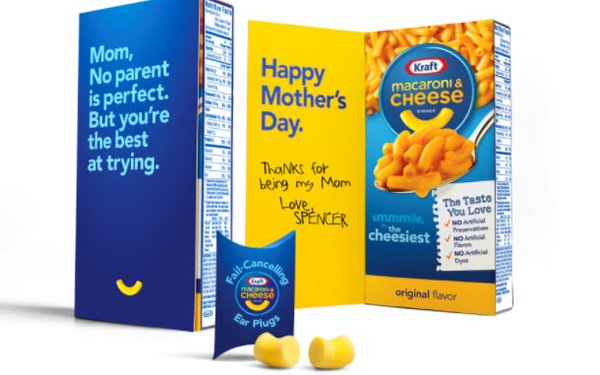 Kraft Macaroni & Cheese is advising moms to “Swear Like A Mother.”

The Mother’s Day promotion is an extension of the brand’s new “Make It Right” campaign, from Crispin Porter + Bogusky. The ads acknowledge that all parents make mistakes, show goofy examples of parental “fails,” and suggest that parents can make it up to their kids by serving Kraft Mac & Cheese.

According to a parenting survey conducted for the brand, 74% of moms (more than dads) admit that they’ve sworn in front of their kids.

So for Mother’s Day, Kraft Macaroni & Cheese is offering moms a humorous video (below) of Melissa Mohr — author of “Holy Sh*T: A Brief History of Swearing” and a mother herself — offering alternative swear words that moms can use around their kids.

Example: “What the frog! You’re acting like flippin’ goof nuggets! Take that horse hockey outside!” As Mohr delivers the R-rated versions of the same messages, the naughty words are bleeped, and Kraft’s smiley-shaped mac and cheese symbol covers her mouth.

The brand also promoted the availability of limited quantities special, free Mother’s Day cards that acknowledge that most moms swear, and come with “fail-cancelling” earplugs and a box of Kraft Mac & Cheese.

The cards were free with registration at www.swearlikeamother.com — but all of them were snapped up within about an hour after they were promoted on the brand’s Twitter and Facebook channels. At which point, the brand began offering 2-D facsimiles that can be printed out and attached to a self-purchased box of Kraft Mac & Cheese, to make DIY versions.