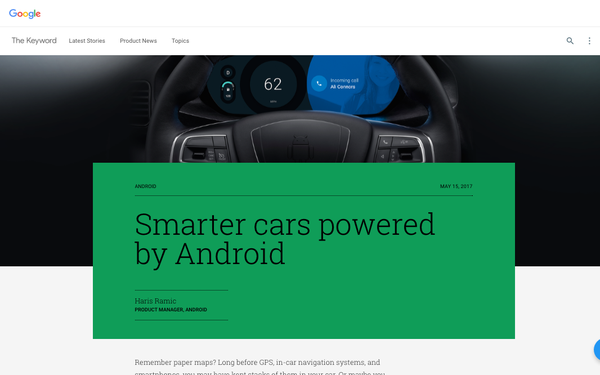 A partnership announced Monday with Audi and Volvo will build Android into their next generation of car infotainment systems that will allow consumers to control their air conditioning, sunroof, and windows, find the nearest restaurant with Google Maps, listen to Spotify or NPR, or just ask your Google Assistant for help.

Consumers will gain access to Android apps developed by Google, Audi, Volvo and third parties even when they leave their smartphone behind. Since the launch of Android OS for cars three years ago, Android Auto now supports about 300 car models and aftermarket stereos.

The goal is to offer "hundreds of popular apps and the best integrated experience in this broad, connected environment to personalize the experience, according to Henrik Green, SVP of research & development at Volvo Car Group. "We are making an important strategic step with the Google partnership," Green said in a statement.

Volvo also said it will update recent Volvo models by adding Google Local Search, a location-based service application. The car manufacturer plans to release the technology through an update to customers with Sensus Navigation.

Google first announced Android Auto -- which initially was just a means to connect the smartphone app to the car's display -- at the company's I/O conference in 2014, and it debuted in one of Hyundai's cars in May 2015. Android Auto allows car owners to control GPS navigation, music, and Internet searches.

While the companies plan to announce additional details at the Google I/O developer conference on Wednesday, it seems that the operating system will integrate directly into the car and consumers will no longer need to use their smartphone other than to transfer and update information.