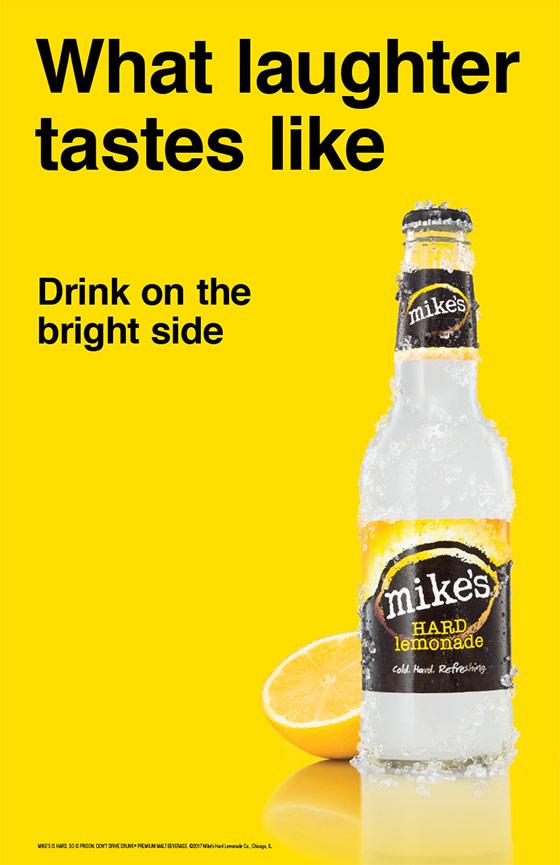 Mike's Hard Lemonade is doing a brand pivot away from speaking about the occasion around drinking to conveying the vibrant emotion felt when drinking it.

The repositioning is being expressed in a new campaign developed with Havas Chicago's Millennial-focused unit The Annex. The "Drink on the Bright Side” creative uses comedy to deliver relief from what  the brand and agency say is the abounding pessimism and negativity currently seen across the Internet and television.

“We’re more focused on connecting with millennials through the content they love and in the places that matter to them most,” stated Sanjiv Gajiwala, VP marketing, Mike’s Hard Lemonade. “This is our opportunity to make hard lemonade better fit into millennials’ lifestyles so that they’re more compelled to pick up a pack of Mike’s at the grocery store for the next happy hour, barbecue or summertime event.”

A series of digital and TV clips mix the eccentric Internet culture, live-action, and green screens with surreal animation. The “Rocket Shoes” video for example introduces a character who cracks open a Mike’s and experiences the unbelievable feeling of flying, thanks to rocket shoes strapped to his feet.

The "Jackpot” TV spot features a game of slot machines that awards the player a trip to a water park's lazy river.

GroupM’s Maxus is managing the media strategy and placement which includes television, digital, social media and street postings. Throughout the summer, ads will air on Millennial-skewing networks such as Comedy Central, Viceland, FOX Sports and FX, as well as pre-roll video on YouTube and Hulu.

As part of campaign the brand is partnering with video storage site Imgur to promote custom content as well as with Snapchat to create a tailored branded offering. Spotify will play radio ads and post standard banners. Animated gif keyboard PopKey will allow consumers to share GIFs through an installed mobile keyboard app.  Emogi will generate specially-designed stickers that will be seen across messaging apps like iMessage.

To complement the campaign launch, Mike’s Hard Lemonade is embarking on a “Happy Camper” mobile sampling tour for which a custom-wrapped, bright yellow trailer will stop in select markets. Those dropping by the trailer can try Mike’s flavors and take part in special brand experiences. Additionally, Havas Formula will amplify the campaign with a PR program through press, influencer and consumer engagements.

Last year, a mostly digital media strategy drove the brand'’s consumption up 12% in the U.S. Mike’s Hard Lemonade has doubled its business since 2009, becoming the fastest-growing U.S. beer company and the seventh largest company in the U.S. beer market, according to IRI.