Can't Read This Ad? Read This Story To Get The Uptake 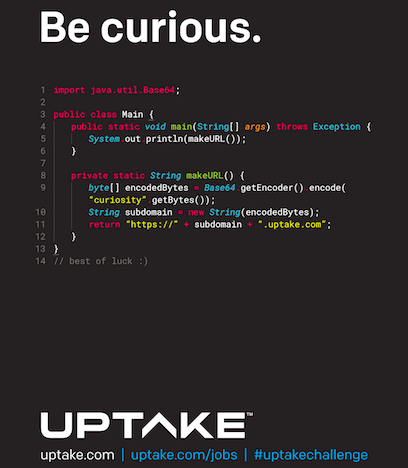 To reach one of the most targeted audiences imaginable -- sophisticated computer coders -- data analytics startup Uptake is using one of the most ubiquitous media possible: out-of-home.

In a four-week outdoor media campaign that broke May 22 on the streets of Chicago, passersby will be invited to participate in the “Uptake Challenge” — but only if they can figure out how to read the posters placed in 150 strategically located bus shelters around the Windy City.

To do that, they will need to know how to read high-level computer code.

The company, which specializes in managing industrial-grade field data -- the kind generated by sensors on industrial equipment, such as a locomotive engines, energy systems or farm equipment -- has seen demand outpace its staffing. It is running its first-ever recruitment campaign and is using the unique creative approach to out-of-home media to find some highly specialized talent.

Parker says Uptake doesn’t know how many pedestrians will be exposed to the campaign, which was created in-house and executed via JCDecaux’s outdoor media team. More than 11,000 people were able to decode the posters and accessed the Internet domain where they could actually enter the Uptake Challenge.

Former Publicis Media chief Laura Desmond has also joined the company as a senior advisor; she played a key role in developing the campaign.

So far, Parker said more than 300 people have actually begun participating in the challenge. The winners will be invited to apply for the Uptake job openings.

“The ad is self-selecting in terms of who it targets, because only people with the ability to read it can actually apply,” she says. “It automatically weeds out the folks that aren’t going to be a good fit.”
campaigns, chicago, computers, out-of-home, outdoor
Next story loading