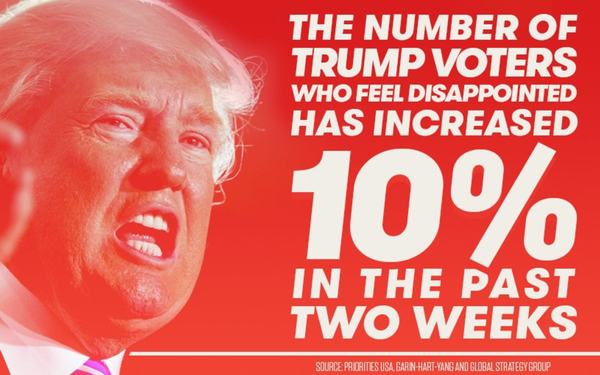 Priorities USA Action raised close to $200 million in the 2016 election in support of Hillary Clinton. The super PAC, led by Democratic Party veteran Guy Cecil last year, is ramping up early for the 2018 midterms.

It's on a hiring spree, drawing staffers from all corners of the Democratic Party.

Priorities retained Saul Shorr and Adam Magnus as advertising consultants, after having worked with their firm Shorr Johnson Magnus in the 2016 cycle.

Digital is expected to be a central focus of the PAC’s advertising strategy for 2018. Politico reports the group plans to expand its online footprint and digital advertising.

To serve as communications director, Priorities hired Josh Schwerin, a national spokesman for Hillary Clinton who spent time at the Democratic Congressional Campaign Committee, according to Politico.

From the Sanders wing of the party, Priorities has tapped Tristan Wilkerson to help run voting-rights efforts. Wilkerson presided over national constituency outreach for the Bernie Sanders campaign in 2016, working as a special adviser for voter protection and political outreach.

Priorities USA was the largest — most money raised and spent— of all registered super PACs during the 2016 campaign. Expect it to retain that mantle in the 2018 cycle, as it begins prepping for the midterm elections, 18 months away.