Over The Rainbow, #Pride Marches Brands Toward The Ampersand 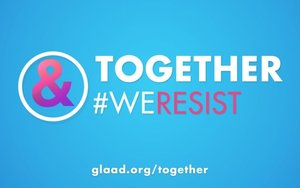 As Pride Month swings into full gear, experts say we can expect fewer of the sweet-and-tender messages of years past, and a little more resistance-fueled edge. But an even bigger trend, they say, is that as activist groups keep broadening messages to invite people everywhere to Pride events, brands will follow.

“We are having more crossover activism, with communities seeing more common causes—including immigration and people of color,” says Bob Witeck, CEO of Witeck Communications and an LGBTQ business strategist based in Washington, D.C. “In the same way January’s Women’s March included everybody, you’ll see this month’s marches including more kinds of people, too.”

That inclusion (or intersectionality, in activist-speak) is so important to media-watchdog GLAAD that it even introduced the ampersand symbol as a way to signify the shift earlier this year, says Rich Ferraro, chief communications officer. “At the marches this month, you’ll see more of these ampersands, with organizers reaching out to all people who are somehow marginalized.”

So yes, the month will still bring plenty of rainbow-colored products and flourishes, from brands as diverse as Target, Marriott, Levi Strauss, Macy’s, Wells Fargo, Campbell Soup, and Nike, whose “Be True”-branded bicycles will be part of parades. But Ferraro also predicts a feistier tone. “In previous years, there’s been a lot of celebration,” he tells Marketing Daily. “This year, we’re living in a new political climate, and as a result, we are seeing a much greater focus on visibility and sharing our own stories.”

And while previous years have seen the White House awash in rainbow lights, President Donald Trump has issued nary a tweet in support. “For the last eight years, LGBT people have been welcomed into the White House. Now they’re being made to feel invisible.”

That has led the community to rethink its messages, he says. This Sunday, for example, instead of throwing its annual Pride parade in Los Angeles, organizers instead are opting to turn it into a protest called the Resist March.

As a result, brands wanting to deepen their connection with the LGBTQ world, a market Witeck says amounted to $971 billion last year, “won’t be using oppositional messages, but marketing will be pro-values. There’s a sense of momentum being lost in the community, and people need to know that brands have their back.”

He also points to a growing awareness in the LGBTQ community that marketers are some of their most important allies. “CEOs have the toughest spine when it comes to defending LGBT rights,” he says. Members of the community want to know that companies support them in many ways, not just with a few tweets or one inclusive ad. And that means it is more important for brands to be vocal about their support: “It drives marketers to drill down even deeper into authenticity, even more into looking into issues, and increasingly, giving back.”

Ferraro agrees. “It has to be about telling stories,” he says. GLAAD is partnering with AT&T for a “We are bold” campaign, for example, emphasizing the need to speak out. And Kenneth Cole is featuring real couples sharing bits of their stories, including a young transgender man and his girlfriend. Levi Strauss, with its fourth annual pride selection, is also taking a more serious tone, with black-and-white t-shirts bearing a “Fight stigma” message.

Witeck also expects an increased amplification in the cause components of campaigns this year, as companies aim to show just how deep their commitment is. Macy’s, which is calling this year’s campaign “Pride + Joy,” for example, says it is stepping up its support of the Trevor Project, which works with LGBTQ youth, and Marriott, a company Witeck works with, is extending its #LoveTravels campaign outreach to homeless LGBT youth, working with Casa Ruby and True Colors. Target, which has extended its rainbow-based Pride line to include a giant unicorn pool float, as well as kids clothes, with logos like “I heart my two moms,” works with the Family Equality Council.

Witeck recently worked with Logo TV on a ranking of the most supportive companies, based on everything from hiring and promotional policies to social media messages to advertising inclusivity. Hilton, Anheuser-Busch, Marriott, Google, Apple, Unilever, Target, American Express, Macy’s and Campbell Soup are named as the 10 most trailblazing companies.