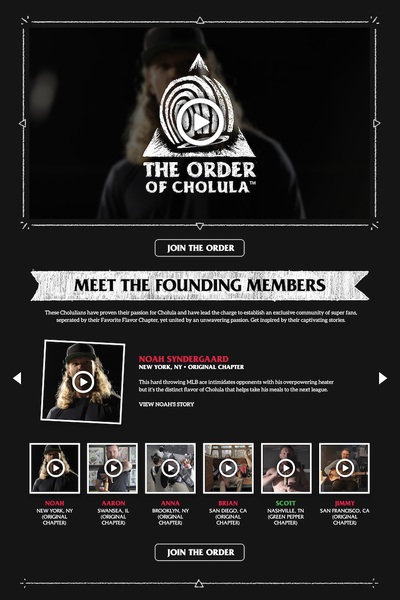 To launch the “Order of Cholula,” the brand is exhibiting a short film developed in partnership with Cohn & Wolfe Studios featuring inspiring stories of real Cholula fans who credit the role the flavorful hot sauce plays in their lives, including Syndergaard.

“They were found through social listening and messages and videos we’ve had sent to us over the past year from our followers who can’t live without Cholula,” says Sharon Nevins, head of brand marketing at the Cholula Food Company.

The recruitment-style video encourages viewers to join Syndergaard and other flavor-seeking zealots by applying for admittance into this members-only club by sharing their Order-worthy stories of Cholula devotion.

“First and foremost, the Order of Cholula was created to bring together people who love the flavor of Cholula Hot Sauce,” Nevins says. “Whether it’s getting a tattoo of a Cholula bottle, writing songs about the sauce, taking Cholula with you across the country or in your bag to your favorite restaurants, inspiring your art or including Cholula in your daily quest for a healthy fulfilling food, we have the most passionate fans.”

Syndergaard will share the short film with his followers and fanbase and will encourage viewers to join him, Nevins tells Marketing Daily. The brand also will run paid, owned and earned media driving people to www.OrderOfCholula.com to apply for membership and view the content.

“The films will be distributed through paid support on YouTube and across various online publishers, and our most passionate fan stories can be viewed across Cholula’s social channels on Facebook, Instagram and Twitter,” Nevins says.

Once accepted into the Order of Cholula, members gain further access to content, including the inspiring full stories of the film’s feature fans, exclusive discounts, merchandise and first access to a new, fan-inspired, limited-edition flavor, Sweet Habanero which will have a small-batch run of 1,000 bottles.

The brand works with Cohn and Wolfe for PR, Spitball Advertising for brand equity-driven advertising and Fuse, Toronto for social media.

“Cholula Hot Sauce has enjoyed a partnership with many Major League Baseball teams over the last several years including the New York Mets, so connecting with a player who uses [it] on just about every meal he eats made perfect sense,” Nevins says. “Anyone who follows Noah on social media or has enjoyed one of his interviews knows about his easygoing, fun personality which we feel is a great match for the everyday male Millennial at the heart of Cholula’s fan base. He also gets what it means to have a loyal and at times, fanatical, fan base like we do.”

This is Cholula's first official celebrity partnership; however, the brand has received unpaid endorsements on social media from notable celebrities, including Lin-Manuel Miranda, Matt Damon and Katie Couric.