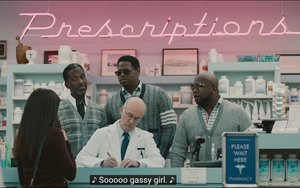 Following in the footsteps of Salt-N-Pepa, Little Richard, Charo and Gladys Knight’s The Pips, Geico has delved into the world of music nostalgia to showcase celebrities who have experienced the heights of popularity but are due for an impactful comeback among a new and younger demographic.

The insurance firm this week breaks a multi-media campaign starring Boyz II Men, a group formed in Philadelphia in the late 1980s, who are multi-Grammy winners with 11 albums to their credit.

The “It’s What You Do” campaign features the trio of Nathan Morris, Shawn Stockman and Wanya Morris, seen here as conduits of bad news, but with a twist: When they sing dreadful news, it goes down like a spoonful of sugar.

In the lead spot, ”Side Effects,” the Boyz are in a pharmacy, harmonizing as a woman picks up her medication so that the side effects (“dizziness, nausea, sweaty eyelids and, in severe cases, chronic flatulence”) actually make her smile.

A voiceover says, “If you’re Boyz II Men, you can make anything sound good. It’s what you do. If you want to save 15% or more, you switch to Geico.”

“We actually came up with the idea of the spot first: When you’re — fill in the blank — you make anything sound good,” Neel Williams, creative director for The Martin Agency, tells Marketing Daily. “We needed a smooth singer or singing group to make the spot work, and Boyz II Men was our very first choice.

“They fell right in the sweet spot of impressive talent and feel-good nostalgia. We wrote them into the script from Day One.”

The campaign will be expanded when Boyz II Men is scheduled to perform live on Geico’s Facebook Page June 25 (4 pm EST).

The Boyz also populate a Geico Web page that links to insurance information.

In a separate faux “Informercial,” Boyz II Men offers their singing services to save people from being “brutally honest with friends and relatives, which could lead to loss of friendship, respect. And, potentially, your front teeth.”

Among the dozen or so 8- to 15-second singing messages are “Birthday” (“My bad, I totally forgot your birthday . . .  again”), “Bad Haircut” (“You know your haircut looks like it was done by a blind barnyard animal”) and “Bad Dancing” (“Last night you danced like no one was watching, but, girl, everyone was watching”).

“Nathan, Wanya and Shawn were so collaborative and easy to work with,” Justin Harris, associate creative director, tells Marketing Daily. “The process was surreal, to be sitting in a conference room with these amazing singers and throwing around lyrics like ‘chronic flatulence’ and ‘excessive earwax.’

“It was a mixture of laughter and amazement because they honestly do make everything sound good.”

BoysZ II Men is currently on The Total Package Tour with New Kids on the Block and Paula Abdul.