No Advertiser On Earth Should Support Sickening 'Blood Drive' On Syfy 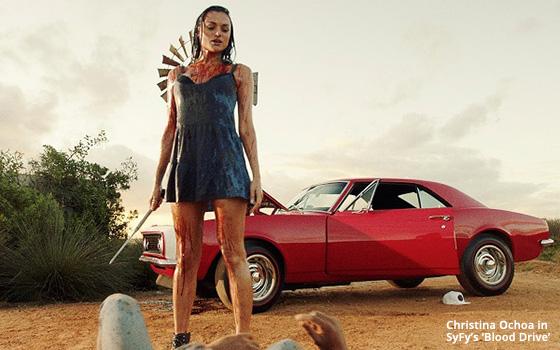 To sponsor or not to sponsor -- that’s still the question.

But this time it involves a new scripted series that is so grotesque that my career as a journalist who watches TV for a living achieved a new low when I undertook the task of watching this show yesterday.

The show is called “Blood Drive” and it’s about a car race in which the racing vehicles are fueled by human blood. It is a piece of garbage that raises the age-old question posed above.

Or you might expand on the question this way: When does the environment created by the contents of a TV show become so repellent that no advertiser on earth would agree to be associated with it?

A few weeks ago, the discussion arose here about what constitutes a harmful environment for advertising following the decision by at least two advertisers to pull their business from the Sean Hannity show on Fox News Channel.

The sponsors were reacting to a spate of negative publicity surrounding Hannity’s coverage late last month of the murder of Seth Rich, a Democratic National Committee staffer who was killed last July while he was walking home in Washington -- reportedly the victim of a robbery.

On his Fox News Channel show, Hannity supported a conspiracy theory in which Rich was killed by someone associated with Hillary Clinton’s presidential campaign because it was suspected that Rich was the source who leaked material to WikiLeaks that was harmful to her campaign.

Supporters of Hillary Clinton and the family of Seth Rich expressed their dismay at Hannity’s clinging to this theory. Some advertisers then decided to disassociate themselves from the Hannity show.

Writing on this subject back then, I marveled at the selectivity of advertisers who would choose to withdraw from a TV talk show when they seem to have no problem advertising in any number of other TV shows -- either scripted or non-scripted -- whose contents are just as loathsome, if not more so.

Cut to this week and Syfy channel seems hellbent on elevating TV’s assault on your senses with a show that is so awful that it’s reasonable to question the sanity of the programming executives who approved its production.

The show -- the aforementioned “Blood Drive” -- is being billed as a work of “grindhouse” cinema, as if this z-level form of moviemaking from the 1970s (or thereabouts) is now to be celebrated as a lost art form.

As I understand the concept of “grindhouse,” these movies existed entirely for their baseless excess of sex and violence. They were blood for blood’s sake, and nothing more. Here in New York, such movies were staples for years in the old theaters that lined West 42nd Street before the area was cleaned up.

So now, Syfy – owned by NBC Universal -- aspires to become the old Times Square of basic cable. Among other excesses in “Blood Drive,” people are seen shoved head first into elaborate grinding machines while they're still alive so that their blood can be used to fuel the cars engaged in this race. This and other forms of casual, gratuitous carnage are a more or less constant feature of this show, as they occur about every minute.

In between the scenes of carnage presumably will be commercials. Unsolicited advice for car and beer marketers: Buying into this show makes about as much sense as placing a newspaper ad for an airline on the same page as a story about an airline crash.

Syfy's publicity efforts indicate that this network -- the home of highly regarded series such as “The Expanse” and the competition show “Face Off” – has now decided to reimagine itself as the home of the worst that TV has to offer.

In a first for a journalist who has covered NBC and its companies for decades, I have now received the first-ever electronic press kit I have ever seen from this company that is rife with f-words. The title given to the first episode of “Blood Drive” airing Wednesday night is “The F---ing Cop.” Another episode later in the first season is called “The F---ing Dead.”

Near the conclusion of the premiere episode, the phrase “f---ing cop” is chanted repeatedly by a large group of blood-drive racing fans.

Syfy informs the TV Blog that all of the language heard in the episodes provided for preview will be heard when the show airs on Syfy starting Wednesday night at 10 Eastern. The show will carry a TV-MA rating, as if that means anything.

So apparently, NBCU has assigned Syfy to the task of becoming NBC’s version of FX, the anything-goes commercial-supported basic cable network that everyone else wants to emulate these days.

And what about the question of advertising? It was suggested by some during the Hannity dust-up that TV viewers do associate sponsors with the contents of TV shows. If that's the case, then why would any advertiser want their brands splattered with the blood and guts being ground up in “Blood Drive”?

advertising, sponsorship, tv
1 comment about "No Advertiser On Earth Should Support Sickening 'Blood Drive' On Syfy".
Check to receive email when comments are posted.
Next story loading