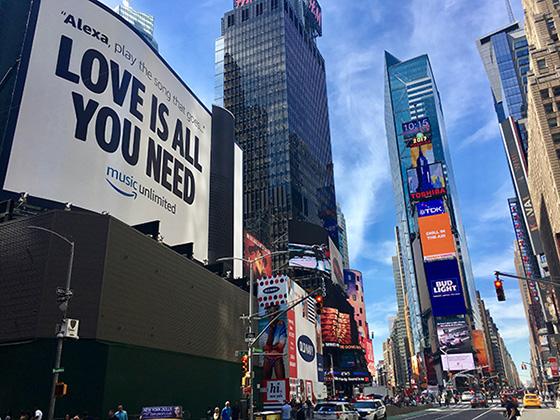 Amazon's campaign, with a message that expresses positive connections and love, launched in 15 cities across the U.S., UK, Germany and Austria.

Times Square has always been a prime advertising location for brands. More than 300,000 visit the center daily and it has become a hub for brands to deliver messages to the masses. For instance, OUTFRONT’s recent launch of their first app-based ON Smart Media Liveboard in partnership with Jetblue in 2016. Working with companies like Rapport, has been significant in allowing OUTFRONT to provide brands with a platform that represents the shift.

The billboard, which stands seven stories high and has a circumference of about 24 feet, has LED lights to make it look interactive, but it's not. In fact, the ad's LED light ring is programmed to replicate the pattern activated when a user asks Alexa a question in real-time such as "Alexa, play the song that goes ... ". In this case it's "love is all you need."

It also breaks Pepsi’s record set in the 1940s for the largest ad installed in Times Square, according to Amazon's agency partners Outfront, Rapport and Traction 3D.