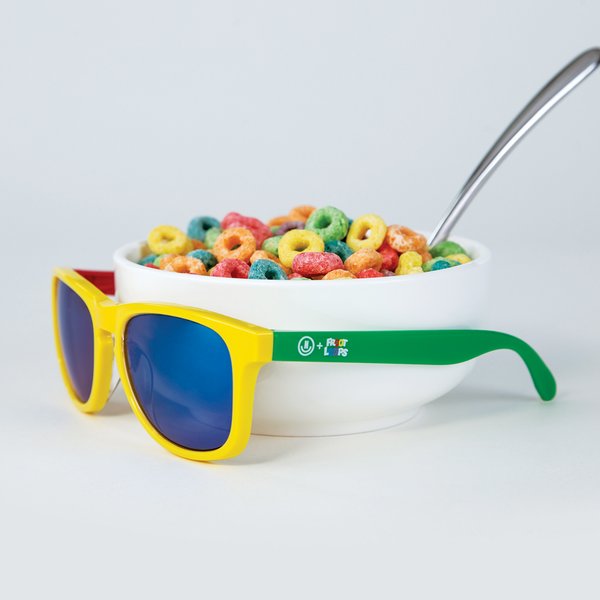 Kellogg is continuing its quest to get Millennials to become cereal fans.

This time, Froot Loops has partnered on exclusive merchandise deals with brands including Neff Headwear, State Bicycle Co. and Timbuk2.
The Millennial effort is part of “Whatever Froots Your Loops,” the first departure from the brand’s “Follow Your Nose” campaign since the cereal launched in 1963.

The marketing approaches to the two age groups are different, but the shared premise is encouraging kids and Millennials to express their true selves and do “whatever makes them most happy.”

Given that authenticity is second only to loyalty discounts when it comes to building brand affinity with Millennials — and that they view fashion and gear as means of expressing their personal “brands” to the world — partnering with influential brands in these categories is a well-reasoned strategy for Froot Loops.

The first offering is a pair of sunglasses from streetwear designer Shaun Neff. Sunglasses were also a very deliberate choice: Of the 96 million pairs of sunglasses sold in 2015, a third were purchased by Millennials, and #sunglasses has been used 17 million times in the last 30 days.

The limited-edition Sam Toucan sunglasses by Neff are meant to “bring to life — outside the bowl — the bright, fun and delicious experience of Froot Loops cereal,” says the brand. The glasses have interchangeable arms and faces that match the various colors in Froot Loops cereal, allowing fans to express their own style.

Those interested will have to vie for one of just 400 pairs being sold for $40. They’re available exclusively at neffheadwear.com/frootloops and the cereal café that Kellogg opened in New York City last July, also in an effort to attract Millennials.

“By offering millennials unique opportunities to engage with Froot Loops and these other celebrated brands, we’re hoping to draw them closer to the brand through a variety of touchpoints across TV, social, mobile, digital and PR,” a brand rep tells Marketing Daily.

Each of the launches is being supported by a kickoff event, video content and social media amplification.

In fact, Froot Loops launched Facebook and Instagram accounts along with the campaign and is offering its first Snapchat lens, pegged to #WhateverFrootsYourLoops.

Digital ads on mobile and Web sites include banners and video content featuring Froot Loops in settings that exemplify the campaign’s motto.

Since last spring, Kellogg also has been trying to get Millennials to consume cold cereals as snacks — in part by offering portable containers.

Froot Loops may have an advantage with Millennials, given their penchants both for nostalgic brands and sweets.