Amazon Moves Past Digital, Buys Whole Foods For $13.7B 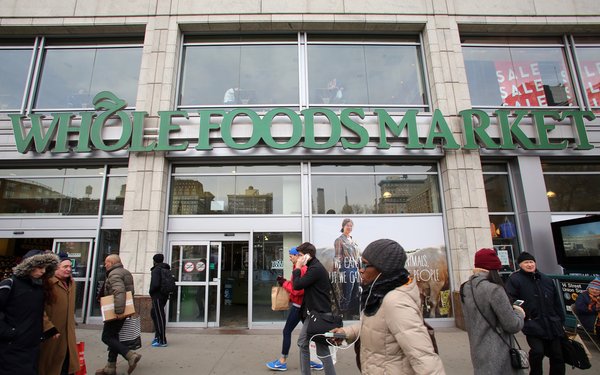 Amazon has agreed to acquire Whole Foods market for a whopping $13.7 billion, giving the online retailer a solid presence in grocery brick-and-mortar stores. The news was announced Friday.

Until now the company has tested the grocery concept with two AmazonFresh Pickup sites and an Amazon Go Store in its hometown of Seattle.

“Millions of people love Whole Foods Market because they offer the best natural and organic foods, and they make it fun to eat healthy,” said Jeff Bezos, Amazon founder and CEO, in a prepared statement.

Whole Foods will continue to operate stores under the Whole Foods Market brand under the leadership of CEO John Mackey, according to the companies. The headquarters will remain in Austin, Texas.

Completion of the transaction is subject to approval by Whole Foods Market's shareholders, regulatory approvals and other customary closing conditions. The companies expect the deal to close during the second half of 2017.

While there was no mention in the official announcement of combining services, the potential to create a cross-services company would enable consumers to buy online and pick up products in stores in many more locations. It also will add the ability to delivery groceries to many more areas across the United States.

Whole Foods has about 465 locations, about 444 in the United States, 12 stores in Canada, and nine stores in the United Kingdom. There are 87,000 employees in 12 regions, according to the company.

Whole Foods Market will give Amazon the footprint and customer base that otherwise would have taken years to build out, wrote Colin Sebastian, analyst at Baird Equity Research, in a research note published Friday. "We also expect Amazon to connect Prime memberships (including Prime Now) and last-mile delivery, forging a dual-track Grocery strategy," he wrote. "Moreover, we believe that Grocery is a key element of Amazon's strategy to drive transactions through Alexa, Echo devices and other connected devices (IoT, such as refrigerators)."

The deal not only has sweeping implications for cross-channel sales, but also in the advertising and marketing industry.

When then WPP CEO Martin Sorrell spoke about the impact Amazon would have on the online advertising industry, it's unclear whether he knew that Amazon would soon announce the multibillion-dollar deal.

Sorrell, during a summit at Stanford University in May 2017, pointed to Amazon and said the company would increasingly become a competitor to Google, as well as others. Some analysts estimate revenue from Amazon's advertising platform at about $2.5 billion. Morgan Stanley forecast that revenue will reach about $5 billion within a couple of years, he said.