Could Excessive Ad Frequency Be Good For Your Brand? 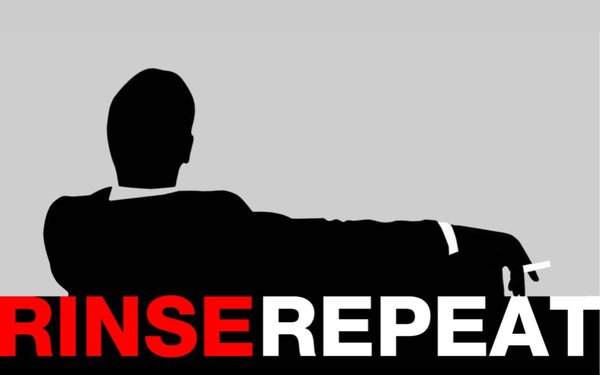 Reach and frequency have always been at the heart of media buying. For those unfamiliar with the practice, the basic principle in media buying is to reach a large portion of a target audience within the constraints of a fixed advertising budget.

And reach everyone not just once, but enough times to have an impact. We’re easily distracted, and we don’t get things the first time around.

In the old days of TV advertising, media expert Bill Harvey points out, that meant buying 210 gross rating points (GRP) per week to get a 70% reach and an average frequency of three exposures per person. So we all found ourselves seeing the same shampoo ad about three times a week.

Not any less because it might not register with us (give it time to wear-in), and not much more because we might grow tired of seeing that same ad (don’t let it wear-out).

The world of television has changed a lot — more networks, smaller audiences, online streaming, mobile viewing — and the tools used by marketers to reach consumers have evolved. But they are still based on the concept of finding the right balance between reach and frequency.

The reach can now be tailored to target not just people of a certain age and sex, but loyal consumers — or people who might be going to the store tomorrow. The frequency can be adjusted, based on certain known conditions — balancing cumulative exposure between TV and digital, for instance.

But the game is still to weigh one against the other to optimize the impact (cognitive, emotional, behavioral) that an ad campaign will have on the target consumer. At the end of the day, three or four certified exposures a week, with perhaps a couple of those closer to the weekend, seems about right for a typical brand.

Or so I thought.

I watched "The Handmaid’s Tale" on Hulu and found myself catching up on past episodes. Thus, I watched several episodes in a row—binge watching! As I’m paying $7.99 a month for my subscription, my viewing experience is curated with programmatic ads. That is, ads that fit my profile.

For some mysterious reason, one of those ads was for DampRid Moisture Absorber. I get it: I live in Florida, so it must be musty in my closet. No problem there, but over the course of a single evening watching "Tale," I saw the exact same 30-sec DampRid commercial not once, not twice—but 15 times! Rinse and repeat.

That happened again with other ads during other binge sessions.

It’s entirely possible that Hulu doesn’t have that many advertisers to play with for viewers like me (and has to rotate the same commercials over and over again). But I’m wondering if it's not actually experimenting on me. Testing how much I can endure before kicking in another $4 to get a commercial-free version of Hulu—or (gasp!) calling it quits altogether and switching my allegiance to Netflix and Amazon Prime.

Have you had the same experience?

There may be something else at play. The two-factor (wear-in/wear-out) theory that's underpinned the notion of capping frequency for the past 50 years isn’t the only game in town. There are other models that suggest instead of wearing out, the impact of an ad campaign continues to grow past a certain number of exposures—albeit not at the same rate.

Frequency needs to be monitored and controlled here, too, but not for the same reasons. 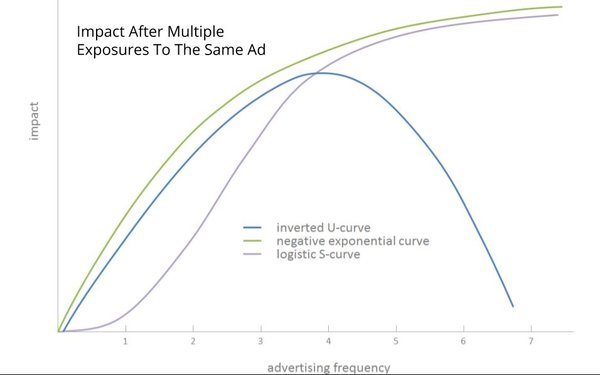 If you wanted to plot the impact of an ad against its frequency, you wouldn’t get an inverted U-curve with these alternate models, but a negative exponential curve or an S-curve, indicative of diminishing returns. People don’t turn away from the brand after three or four exposures in that scenario, but that fifth exposure simply does not offer the same bang for the extra buck. So you might as well spend it elsewhere.

Now, if Hulu and its programmatic partners make it cheap enough for advertisers to purchase that fifth (sixth and seventh, etc.) exposure, it opens up the floodgates.

All of those models have been around for a long time, and have been studied extensively, but not in the context of today’s complex and evolving ecosystem.

Pick an ad for a car manufacturer rather than a household cleaning product, or focus on newbies rather than people already familiar with the brand. You might get even more variations in your results.

Look, I’m writing this article and mentioning DampRid, so that brand is now burned in my brain. I’m not sure it would have been after only three exposures. Will I purchase it next time I’m at the store? Maybe. Will I switch to a commercial-free streaming experience soon? Maybe.

But it feels like Hulu and other digital video providers are essentially bypassing the lab these days and playing with fire — running large-scale, live experiments on a dangerous topic: testing people’s patience. That’s a big bet.

It can have far-reaching consequences for them, their technology and programming partners, as well as the brands that advertise with them. They might be ahead of the curve, but they’d better hope the curve doesn’t go inverted on them!

advertising, commentary, media buying
6 comments about "Could Excessive Ad Frequency Be Good For Your Brand?".
Check to receive email when comments are posted.
Read more comments >
Next story loading