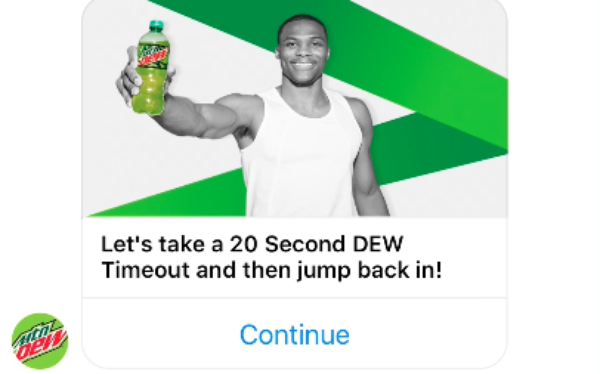 With a record-setting 42 triple-double games last season, NBA star Russell Westbrook knows how to dish out the assists on the court. But he’s also pretty sly off the hardwood as well. In celebration of "Brodie's" MVP’s season (and his recent designation as Best Male Athlete at the 2017 Espy Awards), Mountain Dew is giving fans the opportunity to get some assists from the player on social media.

Via a branded Facebook Messenger bot, "Assists by Russ,” fans can learn more from Westbrook about style, art, and his 2017 season.

“Russell Westbrook pushed the boundaries of what’s possible this season, not only on the court but also through his unique sense of style and engaging presence on social media,” Richie Cruz, NBA lead for marketing of Mountain Dew, in a statement. “To get fans closer to the superstar, we decided to create a Russ-centric Messenger Bot that gives these loyal NBA fans unique access to the unique character that is Russ.”

The bot, developed by VaynerMedia, has more than 200 unique responses to questions about style, fashion and art. Upon starting the bot, consumers can communicate with Westbrook via clickable links as answers to questions. Sections art and fashion, including a section on what outfits Westbrook might wear in different situations. (Wrong answers get a “Hmm, maybe you don’t know me that well” response.) Fans can also explore stats from Westbrook's 2016-17 season.

Mountain Dew (which has also included Westbrook promotions such as a “triple-double breasted suit”) will drive awareness of the “Assists by Russ” bot through paid Facebook posts (one per week for the next five weeks), Cruz says. “We’re going to be using an ad unit that is specific for Facebook Messenger Bots, where upon click-through, the user is taken directly into the bot experience,” he tells Marketing Daily.