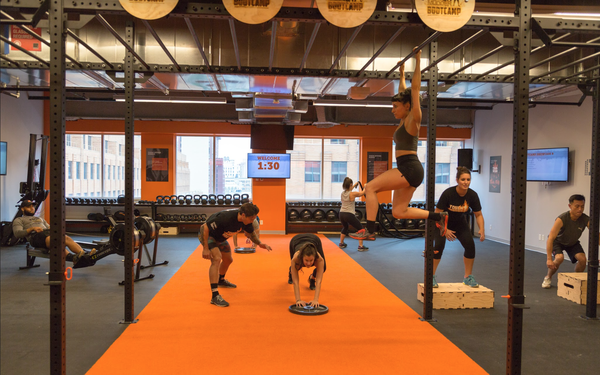 Two Bootcamps have been sold and are slated to open in the Boston and Houston areas before the end of 2017, with another 65 territories already reserved in the United States.

“Messaging and general information have been placed on our social platforms and digital assets that reach more than 4.5 million actively engaged brand followers, as well as distributing direct communications to our database of more than 2.8 million who have participated in a Tough Mudder event,” Spindler tells Marketing Daily. “All communications are aimed to drive interested parties to the Tough Mudder Bootcamp micro-site for further information. This has been complemented with healthy earned media coverage on the brand expansion.”

Based on the Tough Mudder mission that centers on teamwork, camaraderie, courage, personal accomplishment and fun, Tough Mudder Bootcamps focus on team training and community as it increases accountability and fun.

Tough Mudder Bootcamp’s 45-minute HIIT classes will be priced at $15 per class and are designed around four pillars: strength, power, agility and endurance, and to be accomplished with a partner to deliver a full-body workout regardless of fitness level using Tough Mudder’s proprietary technology platform.

Each Bootcamp class will act as “community center” to motivate members to achieve their fitness goals through realistic benchmarks and Tough Mudder events.

Unlike other fitness studio offerings, Tough Mudder is concentrating its efforts on areas outside of major urban centers in which to open bootcamps. Sixty-nine percent of the more than three million people who have participated in a Tough Mudder event reside outside the top 10 U.S. cities proper.

“As soon as locations are finalized (usually on lease signing), we will leverage our database and begin to send geo-targeted communications to Mudders in the area,” Spindler says. “This will sync with a customized marketing plan for each bootcamp owner designed to build awareness and interest even in advance of their location opening, and culminate in a ‘grand opening’ event.”

Post opening, Tough Mudder will continue to support; however, the licensee will be encouraged to implement plans tailored to their specific market to garner the best results as each market varies in terms of demographics and media consumption.

“There will be cross-brand promotions with the licensee as Tough Mudder hosts numerous events across the country and will be encouraging consumers to train at bootcamps to participate in those events,” he says.

No agency has been hired for Tough Mudder Bootcamp specifically. All marketing efforts are being overseen by the various respective internal departments — digital/social, PR, etc., and the agencies that support the Tough Mudder brand overall. They include Labelium, Coyne Public Relations (North America), and Edelman (UK).

Big-box gyms are failing their members — people are not seeing results, so they find the motivation to meet their goals difficult, Spindler says.

“We know because 10% of Tough Mudder participants never make it to the start line,” he says. “These people overwhelmingly train alone or injure themselves training improperly. Machines and treadmills do not train ‘real life’ movements.”