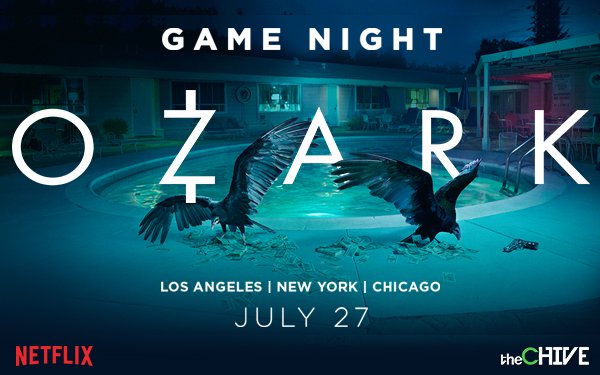 Netflix’s latest show, "Ozark," is a drama about a Chicago financial adviser who heads to the Missouri Ozarks to launder $500 million for a Mexican drug cartel. Perhaps it’s good, then, that the media company is counterbalancing the dark content with a promotion designed to bring some good into the world.

Teaming with entertainment site theCHIVE, Netflix is hosting game nights in three cities on Thursday, July 27, with the goal of giving players a chance to “launder” their own winnings into charitable donations.

“Our overall mantra and positioning is to make the world 10% happier,” Albert Briggs, vice president of sales and brand strategy at theCHIVE, tells Marketing Daily. “We do it by making you laugh and connecting with the community. This does both.”

Taking place at eight bars in New York, Los Angels and Chicago, players will play a modified version of a popular board game (think one that involves property acquisition, but can’t be named because of branding issues). Winners of the games will win $2,000 to donated to a charity of their choosing (for a total of $16,000) donated. Fans can also simply attend the event, which will also include food and Ozark-Themed drinks, for $10.

“It’s funny, so many advertisers get caught up in promoting a feature, and they lose the human element,” Briggs says of the events. “If you’re going to have a human interaction, it has to be fun.”

TheCHIVE has been promoting the events through its social channels and through editorial commentary on its website, Briggs says. “Ozark,” which stars Jason Bateman and Laura Linney, premiered on Netflix on July 21.