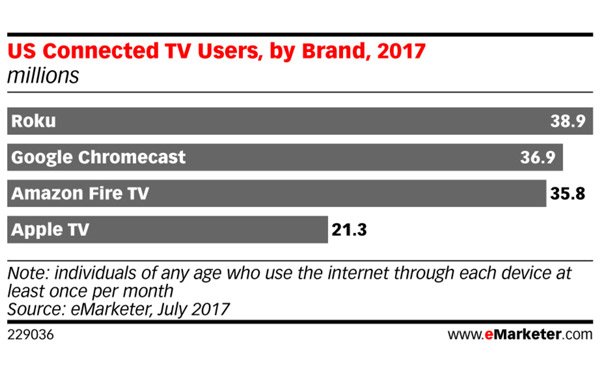 The eMarketer report found that 38.9 million Americans will use a Roku device at least once a month, up 19.3% over last year.  The digital researcher said Roku will capture 23.1% of all connected TV users.  By 2021, its penetration is on track to exceed one-third, and Roku is projected to retain its lead through 2021.

“As the only major market participant not affiliated with a content or TV device platform, Roku has used its neutrality to strike deals with a wide range of partners, including smart TV makers, OTT [over-the-top TV] service providers and social media companies,” stated Paul Verna, principal video analyst at eMarketer.  “That expansive strategy, combined with the company’s broad selection of connectivity devices at various price points, has put Roku at the head of the pack.”

The digital researcher also noted brand overlap, since some consumers and households use more than one streaming device.

Fourth brand on the ranking of streaming devices is Apple TV, which is projected to have 21.3 million users, or 12.7% of connected TV users.

Apple TV is expected to fall further behind its rivals in the coming years; eMarketer noted that as competitors add between 20 and 30 million users into 2021, Apple TV will add fewer than 4 million.

“Apple TV has been held back by the absence of a compelling content offering, a lack of support for increasingly popular Amazon video content, and a much higher price bracket than its competitors,” stated Verna.  “Apple TV devices currently start at $150, whereas Google, Amazon and Roku all sell streaming sticks that are priced well below $40.”

Overall, eMarketer projects that 168.1 million people will watch streaming TV via an Internet-connected device this year in the U.S., up 10.1% over last year.

Separate from the branded connected TVs, smart TVs, "which have connectivity built in and need no secondary device, are the largest single subgroup within the category," with 81.2 million users this year, according to eMarketer.

Those not watching a connected TV are the projected 62.8 million users of game consoles and the 29.0 million Blu-ray users, says eMarketer.