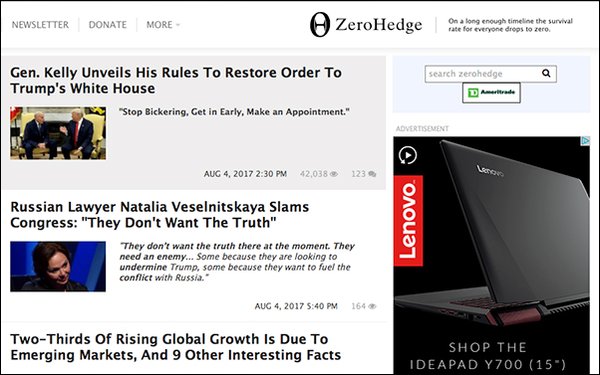 Storyzy, an ad-tech startup that uses AI and natural-language processing to root out fake news sites, found that in July more than 400 brands had their ads placed on websites deemed to be fake news, according to a company post on Medium.

Prospecting for clients, Storyzy  contacted the brands it found appeared on blacklisted sites. Most of those brands said they were unaware their ads were popping up on the likes of The Adobo Chronicles and ZeroHedge -- two sites Storyzy mentioned as examples of fake news (Adobo) or conspiracy theory (Zero).

For example, on Aug. 3, Choozle, YouTube, Coca-Cola, and even the New York State Health Exchange and Northwestern University were advertised on those sites.

Fake news sites are often -- if not in almost every instance -- associated with ad platforms as a means to monetize their content, whether real or not, the company explained. The tension here is not between the publisher and the consumer, but rather between the brand or advertiser and the consumer it is trying to reach.

"For a programmatic campaign, using a blacklist is regarded as the most appropriate solution,"  Storyzy wrote, "as the advertiser can target people whom he wants to reach from a larger inventory and not from a limited whitelist."