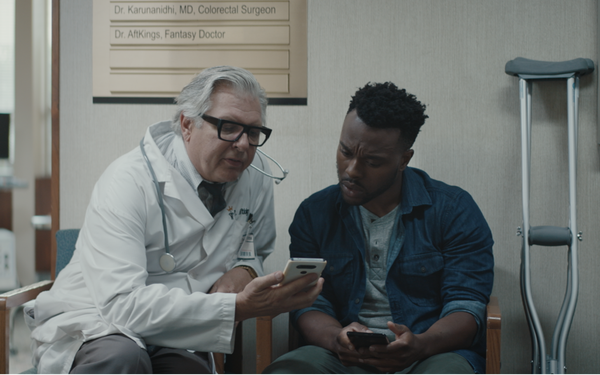 The NFL season is just around the corner and DraftKings wants fans to know they have another option besides “just” watching.

DraftKings’ SVP of Brand and Creative Don Lane spoke with Marketing Daily about the strategy behind its new campaign, which launched Aug. 14. Prior to DraftKings, Lane spent 21 years at Arnold Worldwide, building some of the world's most iconic brands, including Volkswagen, ESPN, Volvo, Carnival & Titleist.

Q: What was the strategy behind the campaign?

A: Research is incredibly important to our business. This year, DraftKings conducted a thorough quantitative and qualitative study to assess the health of our brand, identify the perceptions we need to address and ascertain the drivers and barriers to playing our games. These learnings helped shaped our creative for this NFL season.

Q: Can you talk about why you took the direction you did with the creative?

A: Our campaign includes two creative executions, one inspirational and the other more light-hearted. But both are united in bringing to life our brand positioning, “The Game Inside The Game,” highlighting how DraftKings makes sports better by bringing fans closer to the games they love. They are designed to drive acquisition by educating fans about our full product portfolio, including the ability to draft lineups every week, play with friends and enter contests to win money.

Our primary messaging revolves around the idea of “Play.” Our research uncovered that there are two kinds of sports fans: those who sit back and watch, and those who lean in and participate by playing fantasy football – the game inside the game you love. The theme is, “You don’t just want to watch; you want to play.” It features original footage of dramatic football action shot by cameras placed on the field, inside the action. The story is told through supers and invites sports fans to “play” DraftKings. It includes four primary TV spots and several additional online videos as well as digital, social and outdoor executions. We will update the supers during the season to capitalize on fantasy football news in real time.

The second creative execution uses humor to educate season-long fantasy football players about the benefits of also playing 1-week fantasy football.  It features a character named “Dr. Aftkings,” who diagnoses people who don’t have enough fantasy sports in their lives. His patients include those who have “Draft-itis,” the “Lose-onic Plague” and “Earnings Dysfunction.” The remedy to these afflictions is to “Play” DraftKings, so they can experience more drafting, more games against your friends and more winning – getting them closer to the games they love every week.

Q: Where will consumers see the campaign?

A:  The campaign will officially launch on Aug. 14 during ESPN’s Fantasy Marathon. We leverage a variety of marketing channels that reach both our core customers and potential future players, including broadcast, digital, radio, podcasts, social and out of home.