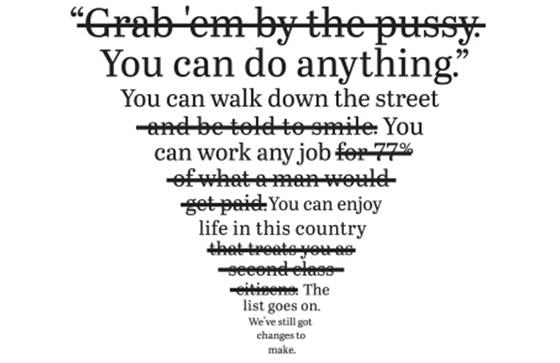 Mono is celebrating Women’s Equality Day — Aug. 26 — by transforming negative statements made toward women over the past year into artwork. It includes that infamous Trump remark caught on tape by Billy Bush about grabbing women by a certain part of the anatomy.

The Minneapolis-based agency poured through hundreds of negative statements, then selected a dozen that staffers reconstructed into empowering messages.

The artwork ranges from looping videos and metal wire sculptures to a match pairs memory game. The work wasn’t limited to “traditional” creatives, nearly half came from employees without experience working on Illustrator or Photoshop, says the agency.

“It’s been almost a century, but when it comes to women’s progress, we still have a long way to go,” stated Paula Maki, Managing Creative Director, mono SF.

“This past year was riddled with attacks on women. We were inspired to turn a select number of these vicious statements into artful and thoughtful, inspirational, entertaining, and beautiful pieces of art. This isn't about turning lemons into lemonade," she said.

"We hope to inspire meaningful change with this campaign, while also shedding light on the fact that sexism is rampant and all around us, from our political and business leaders, to pop-culture figures and anonymous social media trolls. We have so much work to do.”

Beginning today, visitors can view an online gallery of these designs at EqualEveryDay.com, as well as share the individual artwork digitally on Twitter and Facebook, by clicking through to each image.

The campaign hashtag is #EqualEveryDay.

Then, on August 26, the agency will give away 100 prints of the art on a first-come, first-serve basis. Each print will generate a $10 donation to the girlsBEST Fund, a program of the Women’s Foundation of Minnesota, whose mission is to drive gender and racial equity.

This is the second campaign mono has launched in celebration of Women’s Equality Day. Last year, the agency created and gave away 2,000 equality-inspired wearable buttons, which sold out within hours of launching.