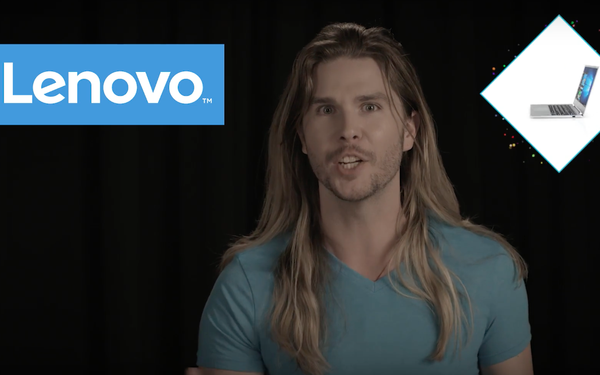 Product demos are nice, but the proof is in how a product works in the real world.

To promote Lenovo’s latest Yoga 720 computer, agency Midnight Oil enlisted three prominent social media personalities to show how the device can help them do their jobs.

“We wanted to highlight real life use cases,” Christy Hayes, account director at Midnight Oil, tells Marketing Daily. “At the end of the day, our goal was about simplifying the lives of daily users.”

The series of videos show the influencers using the Lenovo Yoga as the centerpiece for creating their videos. In one, Nerdist News’ Kyle Hill uses the device for research and ideas while creating one of his “Because Science” episodes. In the video Hill asks the Microsoft AI Cortana to help research an idea about whether Rapunzel’s hair would really be strong enough to hold the weight of a man. He also uses a pen input (and Windows Ink) to jot down ideas and conclusions.

Other videos in the series include fashion designer/scrapbooker Amy Tangerine using the device to show how to create “inspirational lettering” and to design a T-Shirt (embedded below), and mom/woman’s empowerment blogger Jenna Rammell teaching people how to plan a healthy birthday party.

“All three [influencers have] very different personalities that work for the Lenovo audience — Amy as the designer, Jenna a mom and Kyle our sci-fi guy; and also [reflect] the consumer segments the brand is targeting,” says Kelly McCallion, director of integrated production, at Midnight Oil. “They each have well established, active built-in audiences, and make connecting with their followers a priority, which was at the top of our list for vetting criteria.”