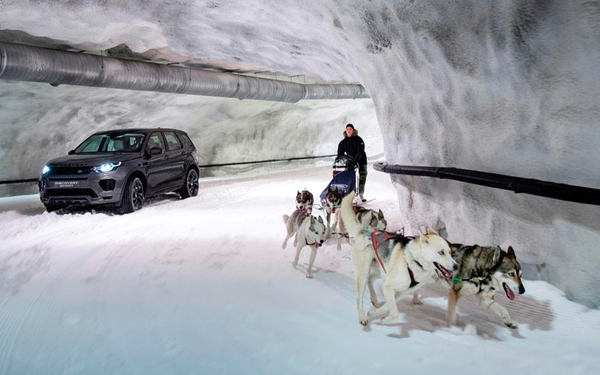 Land Rover transported a team of sled dogs to an underground snow tunnel in Finland for a unique challenge.

This year’s warm summer has left much of Northern Europe without snow.  So the team of husky dogs was in need of training ahead of winter championships to the Vesileppis Ski Tunnel in Finland.

The automaker created a video just over two minutes in length to document and promote the unique race.

With an estimated 50% of Land Rover customers globally owning or regularly traveling with a dog, the automaker said it made sense to put its canine capability to the test. The automaker offered up a Discovery Sport SUV which took on Laura Kääriäinen and her team of six sled dogs.

The tunnel is carved into the bedrock 115-ft below ground level and kept at constant 28.4°F to maintain a blanket of snow .8-in deep throughout the summer.

Setting off in opposite directions, the dogs had a straightforward task. Once they had negotiated the first incline they were able to pick up and maintain speed – typically around 22 mph. In contrast, the path of the Discovery Sport was blocked by a set of ice blocks, which put its wheel articulation and traction control systems to the test, on one of its laps.

Over two laps of the tunnel, the sled team and Discovery Sport were closely matched but the Land Rover won the challenge by a nose.

Before the race, the dedicated accessories in the Discovery Sport helped transport lead husky Jami to the snow tunnel to join his snow-starved pack. An optional full height luggage divider from Land Rover prevents pets from accessing the passenger compartment and easily fits into anchor points inside the vehicle. The video also showed off features like a rubber trunk mat protects the trunk floor and contains minor spills, and a "Gesture Tailgate" feature that  made easy work of getting Jami in and out of the luxury compact SUV. The vehicle's surround camera system, accessed through the 10-inch central touchscreen, allowed driver Richards to keep an eye on the dogs when maneuvering inside the tunnel.