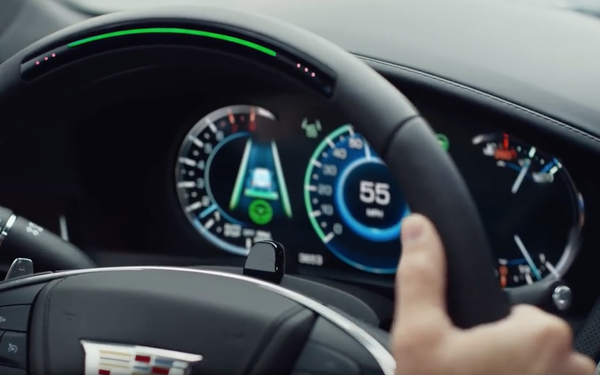 The automaker is calling it “the first true hands-free driving system for the freeway.”

Two spots from Rokkan feature the innovation. The 30-second “Anthem” shows a series of moments in which real people let go of the things that hold them back, highlighting the connection between Super Cruise technology and the emotion behind it. The 30-second “Conversation” shows one of the many ways Super Cruise technology can be used in daily life.

A third execution, “Keep Spinning," was developed by Viacom in partnership with The Story Lab. The 30-second spot celebrates Cadillac’s and MTV’s shared heritage through circular visual references.

The “Let Go: Anthem” and “Let Go: Conversation” media rotation is still being determined, based on vehicle distribution and availability. “Keep Spinning” will continue to run on Viacom platforms into September.

As one of the most-watched and culturally relevant events of the year, the MTV Video Music Awards allows Cadillac to reach a captivated audience around the world, especially a new and younger demographic for the brand, says Renee Rauchut, director, content creation, Cadillac.

“As an iconic brand, Cadillac has always played a significant role in music, having been referenced in hundreds of songs,” Rauchut tells Marketing Daily.

The VMAs also felt like the right fit to showcase Super Cruise, she says.

“Now more than ever, younger drivers are craving such innovative features that will make for a safer, more enjoyable ride,” Rauchut says.

The automaker also partnered with Republic Records to co-host an afterparty in Hollywood. The event featured live performances and unveiled the first-of-its-kind Cadillac Carpool Karaoke Booth — an interactive experience that combines a sound studio with the Cadillac XT5 crossover.

Attendees stepped inside the customized booth and captured a social media-shareable video of themselves singing karaoke with their friends alongside notable performers. Cadillac XT5 and Escalade vehicles are appearing in the Carpool Karaoke series on Apple Music.