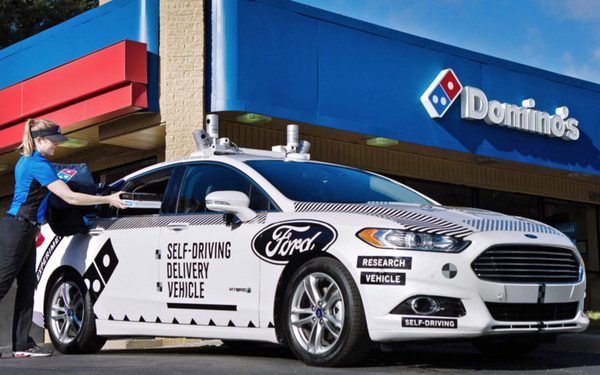 The testing will take place in Ann Arbor, Mich., home to Domino’s and 30 miles west of Ford’s headquarters in Dearborn.

Over the next several weeks, randomly selected Domino’s customers will have the opportunity to receive their delivery order from a Ford Fusion Hybrid Autonomous Research Vehicle, which will be manually driven by a Ford safety engineer and staffed with researchers. The appearance to consumers will be that it's driverless.

Customers who agree to participate will be able to track the delivery vehicle through GPS using an upgraded version of Domino’s Tracker. They will also receive text messages as the self-driving vehicle approaches that will guide them on how to retrieve their pizza using a unique code to unlock the Domino’s Heatwave Compartment inside the vehicle.

As part of the testing, researchers from both companies will observe customer reactions to interacting with a self-driving vehicle as a part of their delivery experience.

Up until now, the focus of self-driving cars has largely been on the technology, says Michelle Krebs, executive analyst, Autotrader.

This is the first step in an ongoing process of testing that Domino’s plans to undertake with Ford, according to Domino’s.

With a plan to begin production of self-driving vehicles in 2021, Ford is hoping to build a business to meet the needs of both partner companies and their customers.