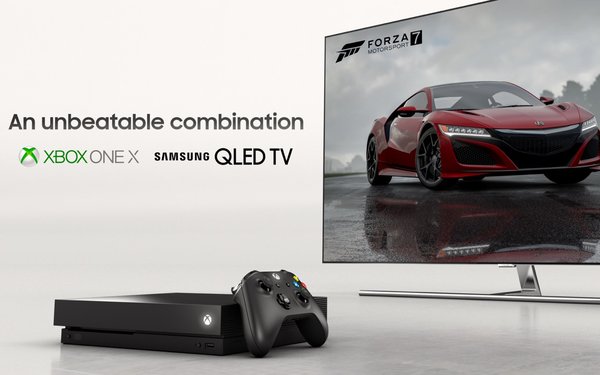 When playing an advanced gaming system, it seems a waste to hook it up to a television that can’t show off all its capabilities.

Samsung and Microsoft have launched an exclusive marketing and retail partnership tying the former’s QLED TVs sets as the perfect partner for the upcoming Xbox One X, which will include ultra-high definition 4K capabilities.

“With the arrival of true 4K gaming this fall, the decision to team up with the Xbox One X team was an easy choice,” Eddie Combs, vice president of marketing for Samsung Electronics America, tells Marketing Daily. “As respective industry leaders in the consumer technology space, Samsung and Xbox are an unbeatable 4K gaming combination.”

The televisions’ picture quality, low-input lag and game-specific optimization settings make them a perfect companion for the advanced Xbox One X console, showing off the games “the way the developers intended,” Combs says.

The connection will be extended into Samsung’s Smart Hub operating system on the QLED TVs, which will automatically recognize the Xbox One X console on connection, and will program the remote to recognize a “Game Mode” voice command to optimize audio and video settings for gaming.

“Xbox One X will bring true 4K gaming to console players for the first time with 40 percent more power than any other console,” said Mike Nichols, Corporate Vice President and Chief Marketing Officer, Xbox, in a statement. “Samsung’s QLED 4K TV is our favorite way to play Xbox One X, and we’re thrilled to join forces with Samsung in the U.S. to deliver immersive 4K gaming experiences to our fans.”

First showed off at this year’s E3 2017 conference in June, the partnership will continue with a custom Samsung TV spot that will run nationally around the launch of the Xbox One X this fall, as well as through marketing and retail activations in the fall and throughout the holiday season.