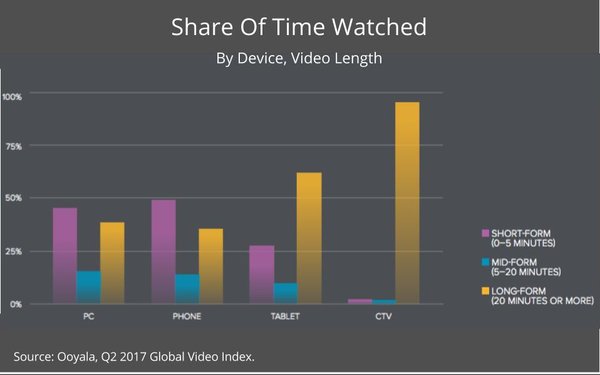 Video consumed on mobile devices may be flattening out, according to the latest installment of a global video consumption tracking study released today by Ooyala.

While mobile viewing continues to be a key driver of over-the-top (OTT) video consumption, its growth was essentially flat in the second quarter of 2017, according to the Global Video Index.

In terms of format, the report also finds that a trend toward longer-form content — videos 20 minutes or longer in duration —continues to be the trend and now represents the majority of time spent watching video across all screens, with mobile devices being the platform of choice versus personal computers.

“Much of that is due to the increasing amount of premium content that services are now making available to all devices,” the report notes, adding: “As longer content becomes more prevalent, an increasing number of users — across all demographics — are as comfortable watching longer form content on smaller screens as they are watching it on big screens. And they’re simply watching more content in general.”

Not surprisingly, inverse trends affecting television are also the case.

The report found that time spent watching video via connected TVs fell to 96% vs. 98% in the first quarter.