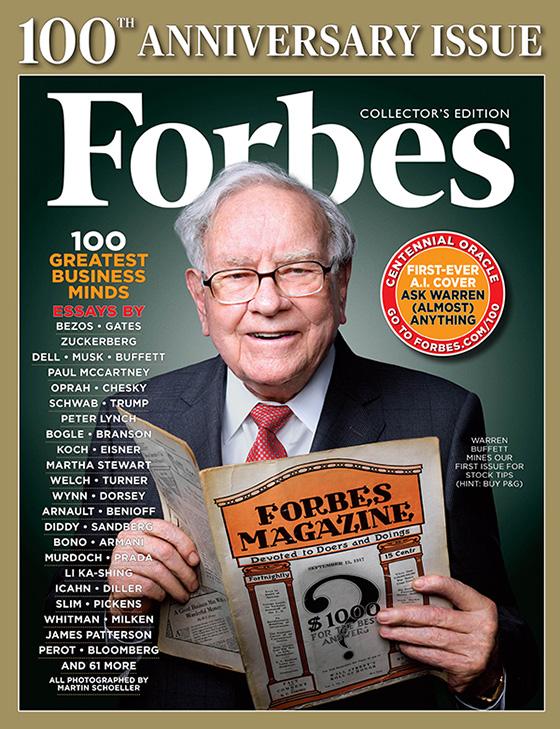 In a tough media environment, it’s a feat when a magazine turns 100.

Forbes today unveiled its special centennial issue, with essays, lessons and ideas from a round-up of the "100 greatest living business minds," as well as an artificial intelligence cover featuring famous businessman Warren Buffett.

“Shepherding a brand like Forbes that’s iconic for entrepreneurial capitalism, we thought it important to both salute the last century and look toward the next one,” stated Forbes magazine editor Randall Lane.

The cover is unique — not just for the anniversary it celebrates, but for its technology. Forbes claims it is the first AI magazine cover that allows readers to interact with the cover subject and "chat" with a virtual Buffett.

Readers can access the experience by heading to www.forbes.com/100 on a mobile device. They will be asked to take a photo of Forbes’ centennial magazine cover, which will unlock a virtual hologram of Buffett.

To develop the experience, Forbes partnered with Mumbai-based Fluid A.I., whose founders were featured on the June 2017 cover of Forbes India and appeared on the 2017 Forbes Asia 30 Under 30 list.

The print magazine cover shows Buffett holding the only remaining whole copy of the first issue of Forbes magazine from 1917. That was the year the publication was created by B.C. Forbes, a financial journalist, and his partner Walter Drey, who was then general manager of the Magazine of Wall Street.

B.C. Forbes has said he created Forbes to “promote humaneness in business,” according to the company.

Features in the issue include “The Original Rich List,” a ranking of the wealthy from 1918, a list of America’s largest 50 companies from the last 100 years, and “100 Years of Forbes’ Hits and Flops,” to commemorate what has and has not worked for the magazine brand in the last century.