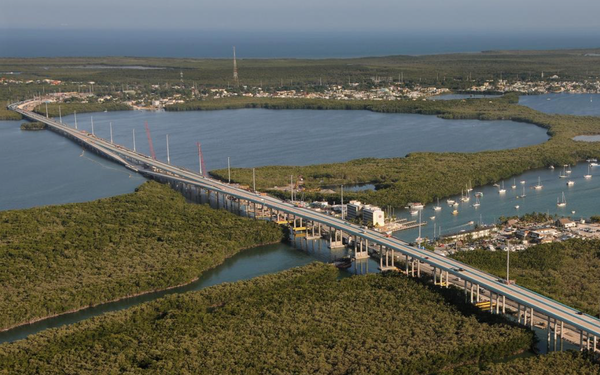 Tourists who planned to visit the Florida Keys overnight are still being asked to postpone their vacation plans and contact their airlines and hotels for further details.

A local state of emergency is still in effect, and Florida Keys officials continue to discourage visitors who wish to travel the Keys via the Florida Keys Overseas Highway to avoid hindering recovery efforts.

However, the Port of Key West has reopened for daytime operations and the first cruise ship port call is expected Sept. 24 or Sept. 26. The island chain’s official targeted reopening date is Oct. 20, the beginning of Key West’s Fantasy Fest. However, that date may be advanced.

Delta was the first commercial airline to resume flights to Key West International Airport on Sept. 20. American and Silver Airways also have resumed commercial air service into the airport.

All bridges on the Florida Keys Overseas Highway are safe for travel. A few breaches in the roadbed caused by storm surge were quickly repaired, according to Florida Department of Transportation officials.

Electricity has been restored to 95% of customers who are able to accept power, according to the Florida Keys Electric Cooperative. FKEC officials said they would start releasing mutual aid crews who came to help from areas outside of the Keys.

The Florida Keys Aqueduct Authority says that all of the islands except Cudjoe Key and Summerland Key now have water 24/7. Water quality testing is ongoing in some parts of the Keys where a boil-water order remains in effect.

Some oceanside resorts and facilities will require weeks or months of repairs to reopen for business. The Lower Keys, located between Marathon and Key West, received the brunt of the storm and recovery is likely to take the longest for many residents and businesses in that area.

“We’ll be welcoming visitors as soon as we get the full go-ahead from Monroe County officials and cities within our five distinct tourism districts,” said Harold Wheeler, the Keys tourism council’s director.